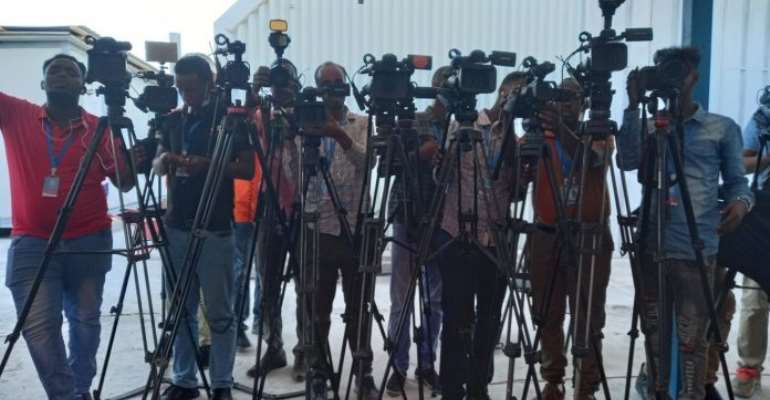 Somali Journalist Syndicate (SJS) calls for the Somali Prime Minister’s office to allow journalists to get unhindered access to the national electoral conference, following the journalists’ complaints that they were deliberately blocked from accessing the ongoing national election talks in Mogadishu.

The National Leaders Conference began on Saturday, 22 May, in Mogadishu with great public interest. Unfortunately, the Somali people do not know what is happening at the discussion table inside the Afisyone hangar at Mogadishu Airport, because the Prime Minister’s office blocked journalists’ coverage of the conference.

Journalists from a dozen local and international media houses told SJS that after registering their names with the Prime Minister’s Office a week ago and had applied access to cover national leaders’ discussions on elections, communication officials of the Prime Minister told journalists that they were not allowed to attend the conference without further explanations.

SJS condemns all kinds of violations including restrictions against access to information, and calls for officials involved to stop reported restrictions and allow journalists to have unhindered access to cover the electoral conference.

“We spoke with journalists from the local and international media, who described their frustrations in attempting to access the conference and how they were blocked by employees of the Prime Minister’s office. We condemn these restrictions,” said Abdalle Ahmed Mumin, Secretary General of the Somali Journalists Syndicate (SJS).

“We call for the Office of the Prime Minister to immediately lift the restrictions imposed on the journalists and ensure all journalists to cover the ongoing talks of the elections without any conditions. Officials should know that an inclusive electoral process is not just about voting, but also a participatory process where people have adequate information about the election process itself in order to make informed choices.”

Article 32 of the Provisional Federal Constitution clearly preserves the right of access to information, including the information held by the state. Blocking journalists’ access to the election conference is a clear violation of the Somali constitution and is also a blatant interference with a fundamental human rights.