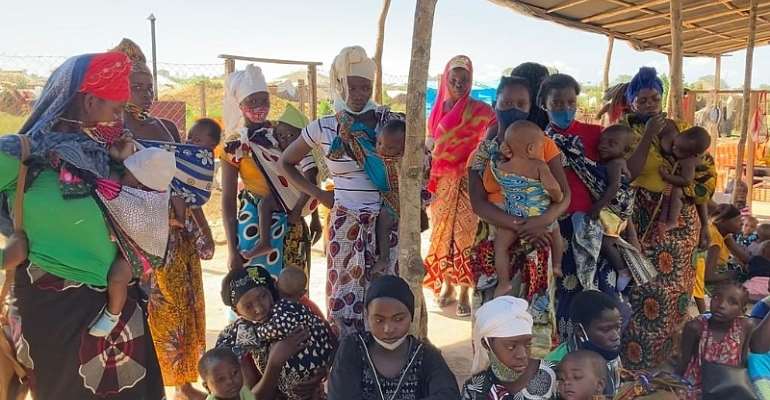 Attacks by jihadists in the north of Mozambique have terrorised the population, who have been forced to flee the violence. Many Mozambicans have opened their homes to accommodate the displaced, but host families are already struggling with their own precarious food situation, according to humanitarian workers on the ground.

“Because of the drought, it's not looking good for the three northern provinces, so the economic pressure on the host community is increasing,” said Pierre Lucas, the World Food Programme's assistant director in Mozambique.

"This is why in addition to 750,000 internally displaced people, the local population is also at risk of food insecurity and the numbers are increasing."

Since October 2017, terrorist attacks in Cabo Delgado in northern Mozambique have caused 2,500 deaths, according to the United Nations, resulting in more than 700,000 displaced people.

The last major attack occurred on 24 March in Palma, near Afungi, where French energy giant Total is building its largest gas investment on the African continent.

While there were "dozens" but no confirmed body counts after the attack, the International Organization on Migration estimates at least 50,000 people fled from Palma. Many are still in hiding and remain unreachable.

The massacres in Palma pushed the displaced into urban areas where people have very little themselves, but they continue to help their fellow Mozambicans in true solidarity, Sylvie Kaczmarczyk, emergency coordinator for Doctors Without Borders (MSF) told RFI in Pemba.

“There are food needs, even for the people living there for the past year – it's still a question of getting food daily,” said Kaczmarczky. “It's very impressive that the situation is not getting tense."

But that's exactly what the WFP's Lucas fears. “This is why we and other partners are looking at these hosting communities and how we design our programme,” he said. “The province already had the highest rate for moderate and severe food insecurity.”

And while food and space is tight in urban areas, those who have moved to internally displaced people's (IDP) camps are truly in need – there are no shelters, running water is an hour's walk away and there are no services in place.

“In host communities, IDPs don't have job opportunities, but they have a roof and food,” said Francesca Fontanini, Senior External Relations for UNHCR.

“For those living in IDP camps there is nothing – no water, no medicine, many people sick after walking for 10 days or living in the bush, and there are many cases of malnutrition. They need a shelter and they are sleeping under the sky without a sleeping mat,” she added.

“In the camp, displaced people want a life. What they have there is not a life,” said MSF's Kaczmarczky.

One aspect of the situation that worries everyone is how children are faring. The food agency is currently working in Cabo Delgado to assist 58 health centres to focus on children and food insecurity.

According to UNHCR's Fontanini, more than 40 percent of the displaced in Cabo Delgado are children.

“Many of them are unaccompanied children or separated children – children and mothers are coming into a completely traumatising situation,” said Fontanini.

The children have other needs as well, especially living in a precarious situation, or having spent time hiding in the bush.

“Our efforts are concentrated on providing psychological support with Save the Children, and also doing the registrations and reunification to bring families together again,” she added.

Mozambique had had an ongoing presence of aid workers due to Hurricane Idai and other natural disaster before the rise of jihadists in 2017 – it's now classified as a complex situation, according to WFP's Lucas.

There has also been an evolution on the ground in how the jihadists operate, according to Salvador Forquilha, researcher at the Instituto de Estudos Sociais e Económicos in Maputo, the capital, who has been studying terrorism in Cabo Delgado for the past four years.

The jihadists in Cabo Delgado have moved – with their religious discourse – from small villages into bigger cities like Mosimba da Praia and Pemba in the north. Pemba was known as a touristic beach city before the current crisis.

“We're talking about a group that is much stronger than before, with weapons that are much more sophisticated than they used to have,” said Forquilha.

“It's a terrorist group, a jihadist group, that is trying to combine an internal dimension in the sense that we have Mozambicans inside the group, but also an external dimension with foreign combatants in the organisation,” he added.

But as in other parts of the greater region, including the Democratic Republic of Congo, Uganda and Tanzania, criminal groups had been operating in the area even before the jihadists showed up.

“All of these local dynamics, with extremist groups in the region, and the existence of criminal groups, who are involved in all kind of trafficking and smuggling – these are all criminal activities and illicit economy that is feeding the armed violence,” said Forquilha.

While the aid agencies and the government are struggling to take care of the basic needs of the displaced and the host communities, including shelter, food and water, Forquilha believes that more engagement is needed by the military.

“At the same time I don't think military action will solve the problem. We need to invest more on the developmental side,” he said. “We need to take governance issues and development issues very seriously, so that people, especially young people, are less incentivised to join the group,” he said.

Text by Laura-Angela Bagnetto, reporting in Mozambique by Liliana Henriques