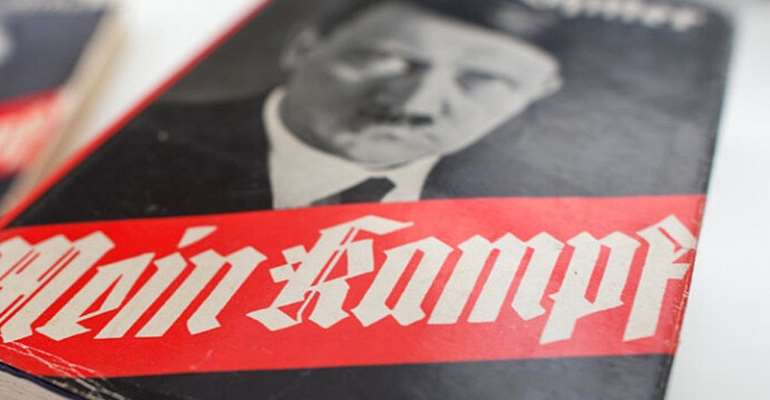 A new, critical edition of Hitler's ranting anti-Semitic manifesto Mein Kampf is to be published in French on 2 June 2021, publishers Fayard announced this week. Sober and heavily annotated for context, the re-translation desanctifies the Führer by staying close to his "unintelligible" original text.

The 1,000-page Historiciser le mal (Historicising Evil) is a hefty 3.6kg tome with a plain white cover – not what you'd call a coffee table book. Fayard's marketing approach owes something to today's cigarette packaging: you want people to buy the product but know they shouldn't be enjoying the experience.

Bookshops will not be allowed to display the book and orders have to be placed in advance. The initial print run is just 10,000 copies.

The book's scope and hefty €100 price tag will likely keep it off most people's bookshelves – but that's not the target audience.

The book is “above all a work of history, aimed at researchers, teachers and teacher trainers”, Sophie de Closets, Fayard's chief executive said this week at a subdued press conference.

Destined to find its place in university and research libraries, Fayard promised to offer libraries a free copy on request.

An important source of history

The French version was completed a while ago but continuing controversy of re-publishing such a hate-filled work led to it being postponed.

In 2015, hard-left politician Jean-Luc Mélenchon said it was pure "provocation" while in 2019, several Jewish associations protested in the name of victims of the Shoah.

But Fayard finally felt able to defend its decision.

“Contrary to what has sometimes been said in a hasty, even dishonest manner, our intention was never to republish Mein Kampf," de Closets said. “But is an important source of our history."

The revised translation makes up only a third of the tome, the bulk being extensive critical comments.

Each of the 27 chapters is preceded by a long introduction, written by a committee of a dozen historians.

They analyse the false statements in Hitler's work, show the ideological distortions, and clarify the historical errors.

The current French version of Mein Kampf, published under the title Mon combat, was translated from the original German in 1934.

“The main characteristic of this text is that it's unintelligible,” translator Olivier Mannoni said at the conference. “The text is confused, so confused it's hypnotising.”

At the time, the tradition was for translators to “write in good French and cover over the roughness,” Mannoni said.

He sought to return to the reality, “to reconnect with the book's insane substance, insistent heaviness, in line with the author's obsessions".

“The text has become authentic once more," said Jewish historian and lawyer Serge Klarsfeld. "It's boring, less stirring than the 1934 literary translation."

“Hitler was a sloppy writer: he's redundant, pompous, with a tendency to bloat," said historian Christian Ingrao. "It was necessary to desanctify this heavy, slow, boring book, which won't convince anyone."

The need to publish

While critics would have preferred Mein Kampf to remain in the dustbin of history, historians involved argue they have a duty to publish the new version.

For a start copies of the 1934 version are still in circulation. In addition, while a 1980 ruling in France means any republication of Hitler's text has to include an eight-page preface, this is considered insufficient to temper the book's hatred.  And then, since the text fell into the public domain on 1 January 2016, anyone can publish.

"We could not be satisfied with the current situation," argued historian Florent Brayard, co-director of Historicising Evil with his German counterpart Andreas Wirsching.

Brayard also believes the book cannot be erased from history. "Mein Kampf is the description of a utopia, the Nazi utopia, which is racist, anti-Semitic, authoritarian and warlike. The tragic aspect is that Hitler found himself in a position to realise it."

Copyright off on Hitler's 'Mein Kampf', but taboo remains

Serge Klarsfeld, president of the Sons and Daughters of Jews Deported from France, adds considerable weight to the decision to publish. Speaking at Wednesday's conference, he reminded people of the crude translations currently circulating in the world, particularly in some Arab countries.

The book's “protective shields effectively arm us against the lies of old, which are more or less the same as the fake news of today", he argued.

Fayard said the rights from sales of the book will be donated to the Auschwitz-Birkenau Foundation.