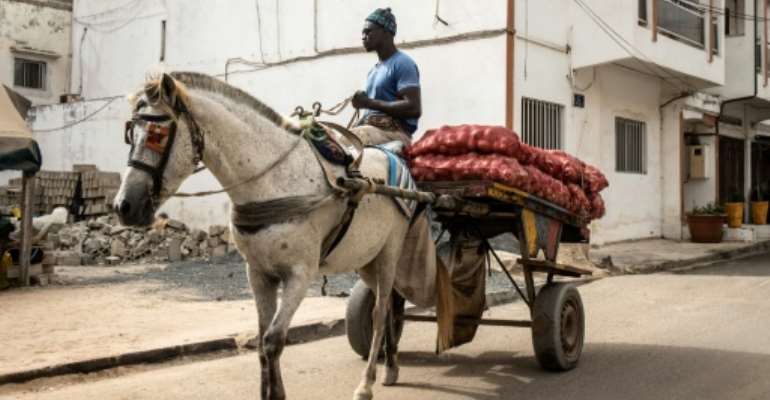 Horses are ubiquitous in Dakar, where carts weave through traffic-clogged streets and squeeze down narrow sandy alleyways. By JOHN WESSELS (AFP)

At dawn, Mame Mor Anta Ly washes his chestnut-coloured horse beneath a noisy overpass on the outskirts of Senegal's bustling capital.

Dozens of other horses are tethered to the ground around him, feeding from troughs improvised from oil drums or rusting bathtubs.

Ly, 40, is waiting to be hired for the day to transport iron rods or bags of cement on his horse-drawn cart.

"Sometimes I wait all day," he said, prayer beads dangling from his neck.

Hailing from a farming region about a hundred miles (160 kilometres) south of the seaside capital, Ly is one of a growing number of rural-dwellers who come to Dakar looking for work with their horses in tow.

Horses are ubiquitous in the booming West African city of 3.5 million people, where carts weave through traffic-clogged streets and squeeze down narrow sandy alleyways.

Drivers carry goods and people at a cheap rate, and increasingly, also collect garbage in neighbourhoods unserved by rubbish trucks.

The work is a lifeline to many rural poor who normally earn little apart from the harvest season, according to Alphonse Sene, the director of equine development at Senegal's livestock ministry.

He estimated the number of cart drivers in Dakar at about 7,000 -- and rising.

Senegal's livestock ministry estimates the number of cart drivers in Dakar at about 7,000 -- and rising. By JOHN WESSELS (AFP)

"It's growing because there's an employment problem in rural areas," he said.

Though part of the fabric of the city, many motorists and municipal administrators view carts as a nuisance that cause congestion and accidents.

There is a risk municipal authorities will eventually ban them, according to Sene.

Cart driver Malick Seck, standing with his white mare outside a construction supplies depot, said he both struggles to make money and faces hostility from other road users.

"No one considers us. People think we're low class," said the 45-year-old.

Drivers interviewed by AFP said that police can move them off roads arbitrarily and that residents place obstacles in the city's rare open spaces to stop drivers from keeping their horses there.

In a bid to ease pressure in urban areas, Senegal passed legislation in 2016 requiring drivers to have permits and tail-lights, and limiting when they are allowed to operate.

With about one million horses and donkeys, Senegal has an unusually high equine population for the region. By JOHN WESSELS (AFP)

But in practice the rules are ignored. Responsibility for enforcing them is also split between three government ministries.

Sene, the director of equine development, acknowledged the disarray.

But he said that his department is conducting a study of the horse-transport sector in Dakar with a view to revising the legislation.

With about one million horses and donkeys, Senegal has an unusually high equine population for the region, said Emmanuel Boure Sarr, from the animal-welfare NGO Brooke.

"Horse-drawn transport is a reality that cannot be ignored," he said, underlining the economic importance of the sector.

Most drivers, unaware of government attempts at regulation, pointed to money as their main concern.

Cart drivers can earn comparatively well if they find clients -- between $8 to $12 a day, according to several -- yet most said they struggled after paying feeding costs.

"You are born into it,' says Diodio Niamen, 51, explaining that horses are one of the few ways to earn money. By JOHN WESSELS (AFP)

Many of Dakar's cartmen are Serer people from the lush Fatick region about 140 kilometres (90 miles) southeast of the capital, where a strong traditional horse culture holds sway.

"You are born into it," said Fatick native Diodio Niamen, 51, explaining that horses are one of the few ways to earn money.

Leaning against his cart on a beach in the north of Dakar, Niamen said he wishes he could stay in his village and farm all year round.

'When I come to Dakar, it's because I have no money," he said. "There's no alternative."