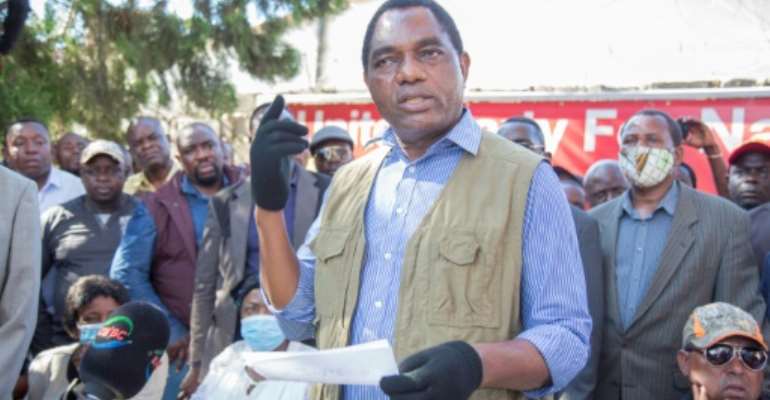 Hakainde Hichilema was jailed for four months after contesting the result of the 2016 presidential election. By SALIM DAWOOD (AFP/File)

The impoverished southern African nation is in default on external debts, estimated at 10 billion euros ($12 billion), half of which are held by private lenders.

Known as "HH" by his supporters, United Party for National Development (UPND) leader Hichilema is up against incumbent President Edgar Lungu, 64.

He has pulled together a slew of other opposition parties to back his "The Zambia We Want" alliance.

"We will make sure that you no longer go hungry and your children should be able to go to school," Hichilema told a crowd of dozens of supporters in Lusaka after filing the papers for his candidacy.

People in the crowd shouted "we want change", while others carried banners declaring "enough is enough, we want HH".

Hichilema narrowly lost in a 2016 presidential bid and was jailed for four months after challenging the result.

Zambia has enjoyed relative stability since its first multi-party elections in 1991.

Voters will pick both a new president and parliament in the August 12 polls.

Any reasonable government will prioritize the abandoned proj...
41 minutes ago