The Use Of Force And Thuggery On "Offenders" - A Primordial Practice 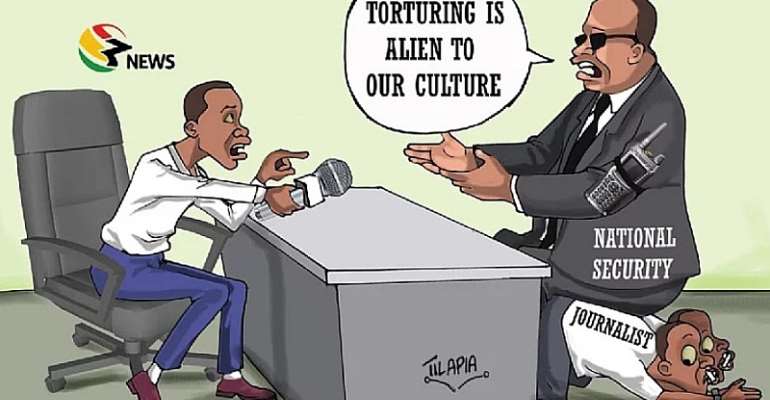 Over the years, many people both guilty and guiltless have had to deal with brute force or thuggery in the hands of security operatives for one reason or the other. The act is not in insolation from my beloved country, Ghana, but all over the world including the almighty United State of America, whose most recent security abuse sparked worldwide condemnation on the hashtag “BlackLivesMatter’”.

The recent incident in Ghana involving Citi FM/TV’s Caleb Kudah and Zoe Abu Baidoo has caused me to reflect on the historical perspectives of such incidents and the need for the state to defend and protect its citizens rather than leaving them in the hands of hungry zombies who call themselves National Security (NS).

In the wake of the Scientific Revolution and the new ways of thinking it prompted, scholars and philosophers began to reevaluate old notions about other aspects of the society. They sought new insight into the underlying beliefs regarding government, religion, economy and education. Their efforts spurred the Enlightenment, a new intellectual movement that stressed reason and thought and the power of individuals to solve problems. Known also as the Age of Reason, the movement reached its height in the mid-1700’s and brought great changes to many aspects of Western Civilization. In the wake of the period came two notable voices on government, one by John Lock and the other by Thomas Hobbes.

My emphasis will be on the views of Thomas Hobbes. Thomas Hobbes who was horrified by the events of the English Civil War concludes “all humans were naturally selfish and wicked, without governments to keep order, Hobbes said, there would be war of every man against man and life would be solitary, poor, nasty, and short. He therefore argued in his book, Leviathan (1651) that to escape such a bleak life, people had to hand over their rights to a stronger ruler. In exchange, they gained law and order.

Hobbes called this the ‘Social Contract’. The situation is no different from Ghana. In the preamble of Ghana’s 1992 constitution, it is stated “IN THE NAME OF THE ALMIGHTY GOD, We the People of Ghana, IN EXERCISE of our natural and inalienable right to establish a framework of government which shall secure for ourselves and posterity the blessings of liberty, equality of opportunity and prosperity”. This is an affirmation by the people of Ghana surrendering themselves under the laws of the country as stated in the constitution.

From the perspective of Hobbes, governments, or elected leaders anywhere in the world have the sole responsibility of protecting the people whose powers are exercised on their behalf by the governments or those elected leaders. Simply put, ‘a government’s power comes from the consent of the governed’ and the governed deserve respect and dignity from the government. In fact, in chapter one Ghana’s 1992 constitution, it is explicitly stated that “The Sovereignty of Ghana resides in the people of Ghana in whose name and for whose welfare the powers of government are to be exercised in the manner and within the limits laid down in this Constitution”.

The same constitution also makes provisions for the state agencies to deal lawfully with anyone who is guilty of any wrongdoing. The Criminal Code of 1960 stipulates all crimes and its related punishment under the laws of Ghana. The phenomena of brute force and thuggery therefore has no place in our constitution or any other related laws. In fact, the constitution is even against the use of torture to extract evidence from hardcore criminals. The question therefore is how did we get here?

From the views of Hobbes, man is evil and with the slightest opportunity will commit crime against his fellow human. It then becomes the responsibility of the state to provide adequate protection for all citizens and to see to it that people who commit crimes are made to face the full rigorous of the law. The irony, therefore, is the situation where elected governments officials hired thugs to intimidate citizens.

The government of Ghana must be seen as protecting its citizens than be seen as unleashing mayhem on them. In the recent case of Caleb Kudah and Zoe Abu Baidoo, the government of Ghana must employ all necessary resources to conduct a thorough investigation and bring the perpetrators to book to serve as a deterrent to others with similar evil intent. It is, therefore, refreshing to hear that the Ministry of National Security has taken up the issue and is conducting an investigation.

This should not be one of the endless investigations we have in this country where justice is always not served to victims of crimes perpetuated by people close to political powers. Remember justice delayed is justice denied. The government’s inability to punish wrongdoings is what clothed criminals with impunity.

As a nation we must be seen as progressing and not living in the 17th and 18th centuries where thuggery and brute force were acclaimed. We now belong to a society where reason and law are used in solving problems.