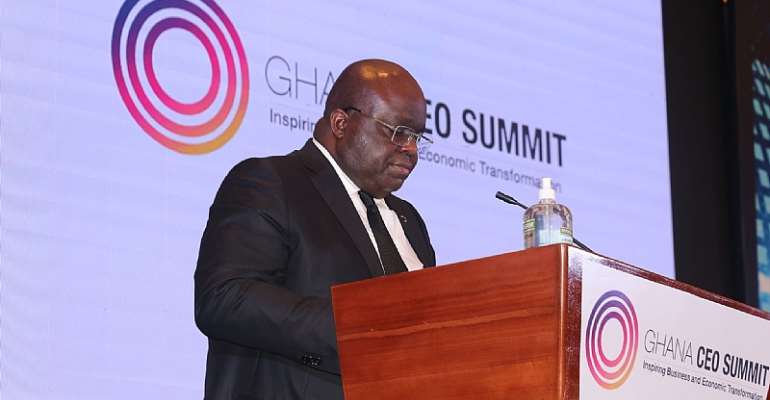 He cautioned that, while pursuing digitilisation goals, “we must take cognisance of the inherent risks associated with digital transformation such as cyber-security, fraud, data and privacy breaches.”

Addressing the 5th CEO Summit in Accra in the presence of the Vice-President of Ghana, Dr Mahamudu Bawumia, Mr Adomakoh stressed the need to continually invest in security infrastructure and other capacity building opportunities to keep all stakeholders abreast of the risks.

GCB is a platinum sponsor of the 5th edition of the annual CEO Summit organised by the CEOs Network/Company.

The GCB MD noted that while the Government of Ghana has put in place policies and structures through institutions like the Data Protection Commission to safeguard personal data, corporate organisations also have a responsibility.

He pointed out that Ghana’s digitilisation drive could be anchored strategically around three interrelated stakeholder points.

“A credible and comprehensive identity system has implications for every aspect of our national life; from mitigating identity fraud, fighting crime and improving tax compliance,” he added.

Mr Adomakoh explained that apart from being the foundation for a more comprehensive digitilisation strategy, it will unlock new level of credit access and provide the platform for building a reliable credit scoring system.

He expressed excitement at the addition of digitisation to the name of Ministry of Communications saying that it would give impetus to Ghana’s Africa Beyond Aid goal of becoming a leader in innovative digital technology by 2023.

Touching on G-Money, GCB’s mobile wallet, Mr. Adomakoh announced that G-Money had recorded one million-plus customers just after a year of being introduced.

GCB, he said, has been at the forefront of the financial inclusion agenda for the past 67 years, diligently meeting the financial needs of Ghanaians with great success.

While expressing appreciation to GCB and G-Money customers for assisting to push Ghana’s cash-lite agenda, he explained that the feat achieved by GCB as a proof of commitment to offer the public not only bank-based financial services but also provide a more broad-based platform to serve others outside the banking system.