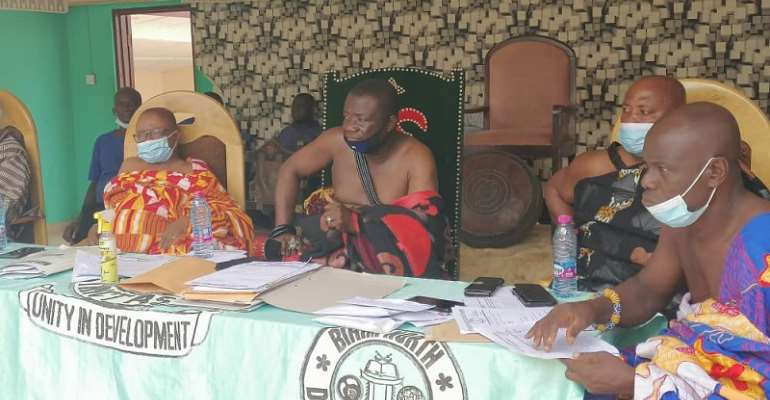 Chiefs in Birim North have kicked against the renomination of the District Chief Executive (DCE) Raymond Nana Damptey.

A leaked audio which is alleged to have come from the camp of the DCE which contains threats against chiefs in the area was played in a meeting attended by the chiefs.

A total of 42 Chiefs were gathered and voted for or against the reappointment of the DCE, the YES was for his reappointment and NO was against it.

The YES recorded was just 4 and NO was 37 and one rejected ballot.

Clearly, the Association of Chiefs in the Birim North District by majority decision has voted against any consideration for the reappointment of the DCE.

The Chiefs among many other reasons cited these key concerns against the DCE;

1. Lack of respect for the Chiefs by refusing to attend to their calls anytime an invitation is extended to him.

2. Involvement of the DCE in Chieftaincy disputes and cited Abodom and Ntronang as examples. In most of these disputes, it turned very violent and bloody.

3. The DCE attacked the Chiefs on his Ananse FM station and also attack by the various assigns of the DCE. They cited the attack on the Chiefs and the President of the Republic by one staunch supporter of the DCE by name Ama Abrafi.

4. Refusal of the DCE to recognize the Chiefs in making key decisions affecting the district.

In the light of the above, the Association of Chiefs in Birim North District led by Obrempong Kwasi Amo Tweretwie I has officially written a letter to the Office of the President with copies to the Vice President, Chief of Staff, Local Government Minister and the Eastern Regional Minister to communicate their decision against the DCE.

Moreover, some Constituency Executives have appealed to President HE Nana Addo Dankwah Akufo Addo to appoint their Chairman, Banor.

Your Excellency Mr. President, kindly accept our congratulations on your re-election and successful swearing-in for a second term as the President of the Republic and the Commander-in-Chief of the Ghana Armed Force (GAF) and Vice President, H.E. Alhaji Dr. Mahamudu Bawumia.

We trust and have no iota of doubt in our minds that you will deliver on your mandate, thus we wish you all the very best.

We emphatically maintain that several reasons make it impossible for the former DCE to be reappointed.