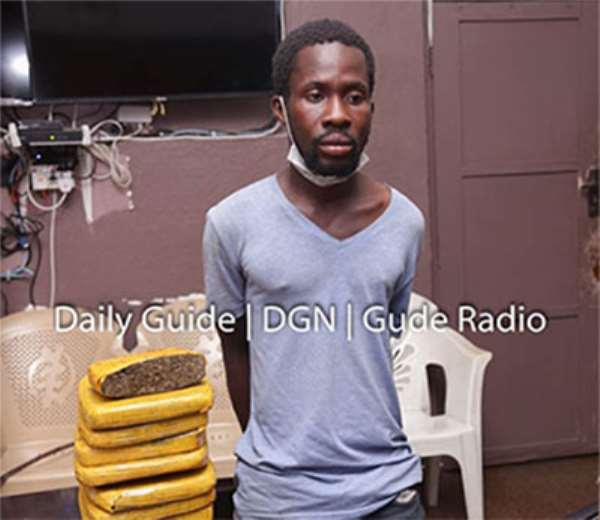 A 28-year old man has been arrested by some officers of the Ghana Police Service for carrying a substance suspected to be Indian hemp popularly known as marijuana at the VIP Jeoun Transport Company Limited in Accra.

On Tuesday afternoon, some personnel of the Special Weapons and Tactics Unit (SWAT) of the Ghana Police Service stationed at the VIP Jeoun Station arrested suspect, Kobina Ebo who was found in possession of a bag containing 10 and a half parcels and 19 small sachets of the substance; and a piece of charcoal.

Narrating the incident to Daily Guide, the suspect, who claimed to be a bus conductor said he was asked by a colleague called Cartel who asked him [the suspect] to join him in escorting some two friends of his [Cartel] to the VIP station to travel to Kumasi.

On getting to the station, one Police officer stopped them and asked them what they were carrying in the bag of which he answered by saying it was packs of Indomie noodles.

Unsatisfied by the response given, the Police officer then ordered them to open the bag. The three other suspects, sensing danger immediately fled the scene leaving only him, Kobina Ebo who was consequently arrested after he had been coerced to open the bag.

Constable George Owusu, the officer who effected the arrest in his narration to Daily Guide said he had been seeing the suspect around the premises for quite some time and so had marked him.

So upon seeing him in the company of others, he sensed they were up to something cynical and so trailed them to a safe place before stopping them to query them on what the content of the bag was.

He disclosed that the suspect, Kobina Ebo, responded that the content of the bag was Indomie noodles which heightened his suspicion the more and forced him to open the bag only to find parcels of the substance in it.

He quickly hooked and handcuffed him before calling in his colleagues after which they sent him to the office of the Managing Director of the company, Adakabre Frimpong Manso where they reported the incident to him.

On his part, Adakabre Frimpong Manso stressed that his outfit does not “countenance” any illegality or the transportation or use of banned and/or illegal substances in the country.

He said, as a law abiding organization, they would continue to do their best to support state agencies in clamping down on the use of drugs and would therefore not allow their various stations to be used as conduits for the transportation of drugs or illegal substances in the country; hence they called the media and personnel from the Police headquarters to witness and take up the matter respectively.