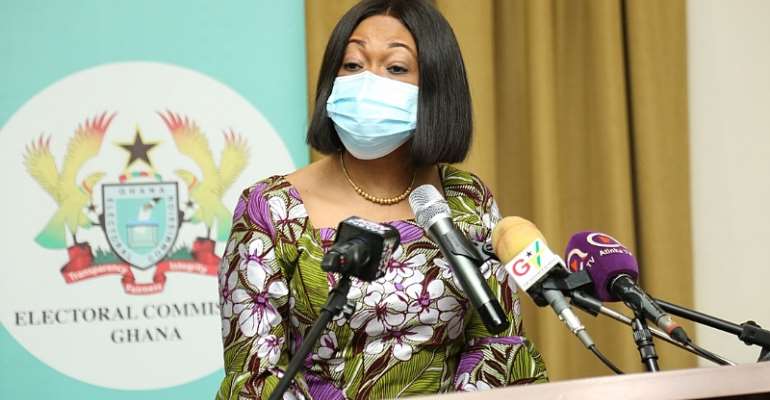 The Electoral Commission (EC), has absolved itself of blame for the electoral violence that resulted in the death of some persons in the 2020 general elections.

Many have criticized the EC for superintending over an election that led to the demise of some voters, something that has never happened under the 4th Republic.

Speaking at an IPAC review workshop on the 2020 polls, the Chairperson of the Commission, Jean Mensa, while condemning the violence and the deaths, indicated that security is not part of the responsibilities of her outfit.

“An exceedingly disturbing challenge is the violence which led to the death of citizens of our country. And we say never again. Never again should we go to an election and have anybody lose their lives. Here also, there is a tendency for fingers to be pointed at the EC when security is not the core mandate of the EC.

“I have read the constitution and security is not part of our core mandate. I use this occasion to clarify that the EC is not responsible for election security, although the entire election and its success rest on the shoulders of the Commission. Our mandate as entrenched in the Constitution does not include security.”

This is one of the few times the Electoral Commission chair has spoken strongly to condemn the violence and the subsequent deaths recorded in the election.

The Commission had initially heaped praises on itself for the way the election was conducted, regardless of the deaths and the many disagreements that eventually led to an election petition by the opposition NDC’s Presidential Candidate, John Dramani Mahama, to challenge the Presidential results at the Supreme Court.

Some parliamentary election results, notably that of Techiman South, is currently being contested in court between the NDC and the NPP candidates.

There were 61 recorded cases of electoral and post-electoral violence across the country, according to the police.

Six members of the Minority have already tabled a private members' motion in the House seeking a full-scale probe into acts of violence that occurred in the 2020 general elections.

The MPs; Haruna Iddrisu, Muntaka Mubarak, Mahama Ayariga, Alhassan Suhuyini, and James Agalga want the scope of the probe to take a look at the inappropriate interferences by state security in the elections, and violence against citizens, leading to the loss of lives.

They insist the IGP and other security agencies reneged on a promise to Parliament and Ghanaians to protect lives.

Many have criticized the government for doing little about the violence and the deaths through an investigation to bring the perpetrators to book.