By Anna Malpas, with AFP bureaus 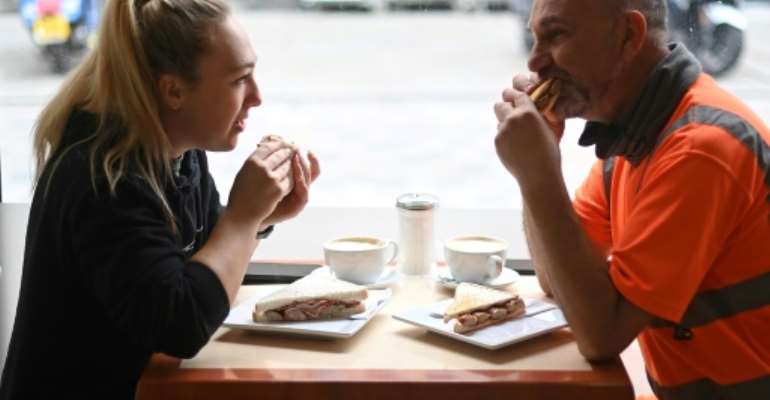 Pubs, cafes and restaurants opened along with cinemas, museums and sports venues across Britain. By DANIEL LEAL-OLIVAS (AFP)

Britons hugged their loved ones and streamed into pubs, gyms and other indoor venues on Monday as the country eased pandemic restrictions, but Asia faced more misery with new variants and a cyclone disrupting the fight against a Covid-19 wave ravaging India.

As the United States and Britain move away from harsh restrictions thanks to rapid immunisation campaigns, new strains have forced several countries in Asia to shut schools and impose travel bans, highlighting the persistent global threat posed by the pandemic.

With known global infections approaching 163 million and the rise of new variants complicating the fight, governments still pushed ahead with easing restrictions -- a moving step for some.

Indoor venues in France, including the zoological park of Saint-Martin-la-Plaine, are due to open on Wednesday. By JEAN-PHILIPPE KSIAZEK (AFP)

"I actually feel a wee bit emotional saying this... you can hug your loved ones again," Scotland's First Minister Nicola Sturgeon said as businesses reopened in what The Sun tabloid dubbed "Freedom Monday".

'Nice to be back'

Across England, Wales and most of Scotland, people on Monday could once again grab a drink, a bite and dine inside pubs, restaurants and cafes.

Cinemas, museums and sports venues also opened their doors for the first time in months.

People were able to once again visit each other at home -- and to head to Portugal, where the British are normally the largest tourist contingent.

"It's nice to get away and be back here," said Barry Thompson, a 63-year-old retired policeman from Manchester who landed in the southern town of Faro with his wife and son.

In another sign of life returning to normal in Europe, Disneyland Paris announced it would reopen on June 17.

But authorities have urged caution and warned that with new variants spreading, restrictions could be reintroduced.

The pandemic has claimed more than 3.3 million lives worldwide, and one of the worst outbreaks is in India, where at least 4,000 people are dying from Covid-19 every day.

India was already dealing with limited medical infrastructure and scarce vaccine supplies, when a major cyclone in the Arabian Sea packing ferocious winds bore down on the South Asian nation.

Gujarat state moved all Covid-19 patients from hospitals within five kilometres (three miles) off the coast where the storm is expected to hit.

Authorities there were also scrambling to ensure there would be no power cuts at designated Covid-19 hospitals and oxygen plants in the districts under threat from the storm.

Singapore has tightened restrictions because of a fresh outbreak, including the closure of schools. By Roslan RAHMAN (AFP)

The variant behind the explosive outbreak in India has spread to at least 44 countries, according to the World Health Organization.

They include Singapore, where a growing number of cases has prompted the government to tighten restrictions, including closing schools.

"A lot of people have taken for granted the past few months of peace and stability, but this is a wake-up call," said Anthony Chang, a hawker stall owner in the city-state.

And authorities in Taiwan, which emerged relatively unscathed from the pandemic last year, announced a suspension of classes in schools from Tuesday in Taipei and adjacent New Taipei City as the island battled a surge in infections. The island also banned all foreigners, except residents, from entry or transit for a month.

In South Africa, the continent's worst-hit country on the cusp of a third wave, authorities on Monday launched a large-scale vaccination campaign aiming to immunise five million people over the age of 60 by end of June.

The persistent threat of the coronavirus is casting a shadow on the already delayed Tokyo Olympics, due to begin in less than 10 weeks even with parts of Japan under a state of emergency.

A man is vaccinated in Hyderabad, India. By Noah SEELAM (AFP)

Organisers have insisted that they will go ahead despite the risk, but the opposition was brought into focus Monday when a new poll showed 80 percent of Japanese were against hosting the Games this year.

Japan's vaccine rollout has been slow despite its wealth, but concerns are growing that poorer nations will be left even further behind because of vaccine inequality.

"We are concerned that the deadly spike in India is a precursor to what will happen if those warnings remain unheeded," UNICEF executive director Henrietta Fore said Monday.

In France, pharmaceuticals giant Sanofi reported positive results for a Phase 2 trial of a Covid vaccine it is developing with Britain's GSK, which will enable a late-stage trial to start in the coming weeks.