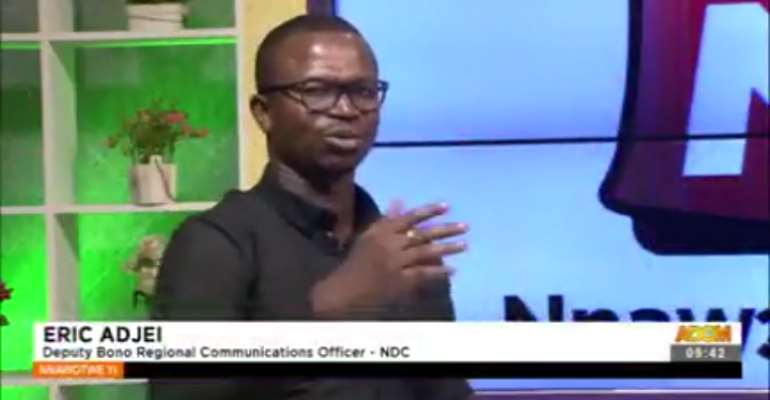 A member of the National Communication Team of the opposition National Democratic Congress has expressed his disappointment in the President of the Ghana Journalists Association, GJA for his comment on the arrest of two journalists of Citi Fm and Citi Tv.

Mr Eric Adjei, who is also the Deputy Regional Communications Officer of the NDC in the Bono Region, made this comment on Adom TV during a panel discussion on the topic ''unpacking National Security handling of Citi Fm's reporters''.

The GJA President, Mr Affail Monney, has come under public backlash for his earlier comment that Mr Caleb Kudah breached the association's code of ethics when he filmed the grounded MASLOC vehicles at the National Security premises which, may have been a justification for the assault on him.

This comment by Mr Monney, have not gone down well with major players in the media and that led the Executive Director of ASEPA to issue a statement calling for his removal should he, Mr Affail Monney, failed to retract his comment and unreservedly apologise to the victim, Mr Caleb Kudah.

On Friday, May 14, 2021 Mr Affail Monney in a statement to clarify his earlier comment, said the had sketchy details on the incident at the time he was interviewed on it.

''Admittedly, the information i had was sketchy. I roundly condemned the invasion of Citi Fm premises by the National Security Operatives and apologise to Caleb for my earlier comment''.

Speaking to this issue, Mr Eric Adjei sympathised with Mr Caleb Kudah, the victim in this case and condemned the action of the National Security operatives.

''I am very disappointed in Mr Affail Monney for his earlier comment. Per your own code of ethics, one must always have the facts before one comes out to speak on issues and if the president of the association can breach on such ethics and later hide behind his failure and attribute it to sketchy information, then you must vote him out in your next election'.

''If you are a leader, in times of difficulty, you should always be there for your people,'' Mr Eric Adjei stated.

He continued, ''As a leader, if you immediately come out to condemn an act by your member, and later comes out to purportedly render an apology for claiming to have sketchy information on the act, then the members of the association must vote against you in the next election''.

He talked about the arrest and torture of Modernghana journalists in June, 2019 by the National Security operatives over an opinion piece against Albert Kan-Dapaah, the National Security Minister. He said, up to date, nothing has been said of that case after Information Minister Kojo Oppong Nkrumah promised government was going to comment about the case after the internal investigation has ended.

''If you have such a leader as Mr Affail Monney, then why won't the National Security Operatives, continue to unleash mayhem on journalists in their line of duty''?

Four suspects arrested over attacks on motorists along GIMPA...
44 minutes ago

Chinese man crushed to death at Suhum
44 minutes ago