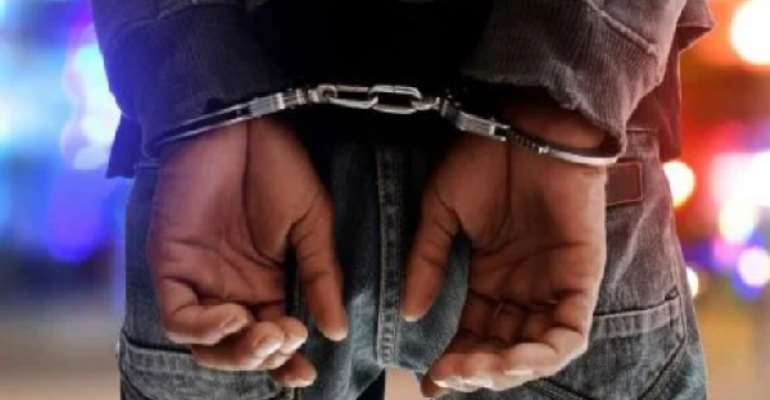 A notorious Appolonia land guard who had been on the police radar for some time now in connection with unleashing terror and mayhem on developers and landowners in the Appolonia Township and its environs has been arrested.

Dortey Abladey, age 32, is said to have been terrorizing the Appolonia township for some years now, attacking land owners and demolishing their buildings claiming ownership of such parcels of lands which are part of the Appolonia stool lands and can only be leased by the chief.

Abladey was finally caged when he was busted by police after he led a group of land guards on motorbikes to illegally demolish several buildings and erected walls on a parcel of land belonging to private developers in the area last two weeks.

An Accra circuit court presided over by His Lordship Samuel Acquah has remanded Dorthey Abladey into the Nsawam prison custody for two weeks.

According to the fact of the case, Grace Kokui Kwasiwa James-Odoo accused Abladey of using armed wielding land guards to terrorize her and others on her parcel of land she legally acquired with all the necessary documents.

According to the police, Abladey acted as land guard on a parcel of land at Appolonia and owned respectively by Grace Kokui Kwasiwa James-Odoo, Micheal Nii Afortey and Constant Bansah causing unlawful damage contrary to section 172 of the criminal offence Act.

According to the court, Dortey Abladey is to reappear in court on 19th of May 2021 for hearing.

In an interview with some residents of the area following the arrest and remand of Dortey Abladdey, they noted that the menace of the land guard activities have gained notoriety in the area stating that “the mention of land guards sends shivers down our spines”.

“We have abandoned the idea of buying lands to put up our won houses. The reason is just the fear of these land guards who do not only intimidate but sometimes go to the extent of even killing innocent people just because they have bought lands and developing on same”, one resident lamented.

They said the situation is going from bad to worst with the land guards on daily basis are always combing new developing areas and terrorizing developers.

They appeal to police administration to work hard to eliminate them to allow people the peace of mind to develop their lands they bought with their last savings.

Four suspects arrested over attacks on motorists along GIMPA...
22 minutes ago

Chinese man crushed to death at Suhum
22 minutes ago