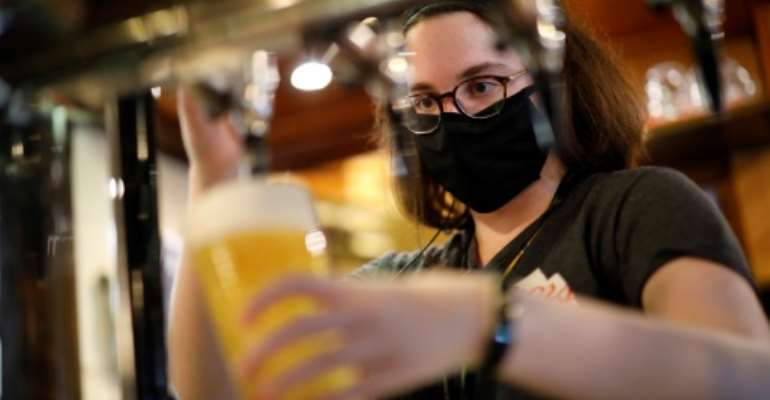 Britain is set to take a big step towards normality with a further easing of coronavirus restrictions. By Tolga Akmen (AFP/File)

Britain took a big step towards normal life on Monday with more easing of coronavirus restrictions, but there was even more misery in India where a powerful cyclone disrupted efforts to fight a devastating Covid-19 wave.

Rapid vaccinations have allowed the United States and Britain to start moving away from harsh restrictions, but tighter curbs imposed in Taiwan and Singapore highlighted the persistent global threat posed by the pandemic.

With known global infections approaching 163 million and the rise of new variants complicating the fight, even the governments easing restrictions are also warning citizens to remain careful.

"Together we have reached another milestone in our roadmap out of lockdown, but we must take this next step with a heavy dose of caution," British Prime Minister Boris Johnson said Sunday.

"We are keeping the spread of the variant first identified in India under close observation and taking swift action where infection rates are rising."

Across England, Wales and most of Scotland, indoor hospitality in pubs, restaurants and cafes will return.

Cinemas, museums and sports venues will also open their doors for the first time in months.

People and families will also be able to meet with some restrictions inside private houses and international travel will resume to selected nations, including Portugal.

But authorities did not rule out localised restrictions in response to outbreaks even as the number of fully vaccinated people in Britain topped 20 million, with the Indian variant of special concern.

The pandemic has claimed more than 3.3 million lives worldwide, and one of the worst outbreaks is in India, where at least 4,000 people are dying from Covid-19 every day.

India is struggling with one of the worst coronavirus outbreaks in the world. By Arun SANKAR (AFP)

India was already dealing with limited medical infrastructure and scarce vaccine supplies, when a major cyclone in the Arabian Sea packing ferocious winds bore down on the South Asian nation.

Gujarat state moved all Covid-19 patients from hospitals within five kilometres of the coast where the storm is expected to hit.

Authorities there were also scrambling to ensure there would be no power cuts at designated Covid-19 hospitals and oxygen plants in the districts under threat from the storm.

Singapore has tightened restrictions because of a fresh outbreak, including the closure of schools. By Roslan RAHMAN (AFP)

The variant behind the explosive outbreak in India has spread to at least 44 countries, according to the World Health Organization.

They include Singapore where a growing number of cases has prompted the government to tighten restrictions, including closing schools.

"A lot of people have taken for granted the past few months of peace and stability, but this is a wake-up call," said Anthony Chang, a hawker stall owner in the city-state.

And authorities in Taiwan, which emerged relatively unscathed from the pandemic last year, announced a suspension of classes in schools from Tuesday in Taipei and adjacent New Taipei City as the island battled a surge in infections.

The persistent threat of the coronavirus is casting a shadow on the already delayed Tokyo Olympics, due to begin in less than 10 weeks even with parts of Japan under a state of emergency.

Calls are growing for wealthier nations to donate their spare vaccine doses to poorer nations to help fight the pandemic. By Orlando SIERRA (AFP)

Organisers have insisted that they will go ahead despite the risk, but the opposition was brought into focus Monday when a new poll showed 80 percent of Japanese oppose hosting the Games this year.

"This is not an issue only for Japan. Athletes from overseas must be worried as well, given Japan's coronavirus situation is bad," said 53-year-old Tokyo resident Takahiro Yoshida.

Japan's vaccine rollout has been slow despite its wealth, but concerns are growing that poorer nations will be left even further behind because of vaccine inequality.

The WHO chief on Friday asked vaccine-wealthy nations to refrain from giving shots to children and adolescents and instead donate those doses to other nations.

The urgency stems from a fear that the virus could give rise to more contagious or more deadly variants.

"We are concerned that the deadly spike in India is a precursor to what will happen if those warnings remain unheeded," UNICEF executive director Henrietta Fore said Monday.

"Cases are exploding and health systems are struggling in countries near -- like Nepal, Sri Lanka and Maldives -- and far, like Argentina and Brazil."