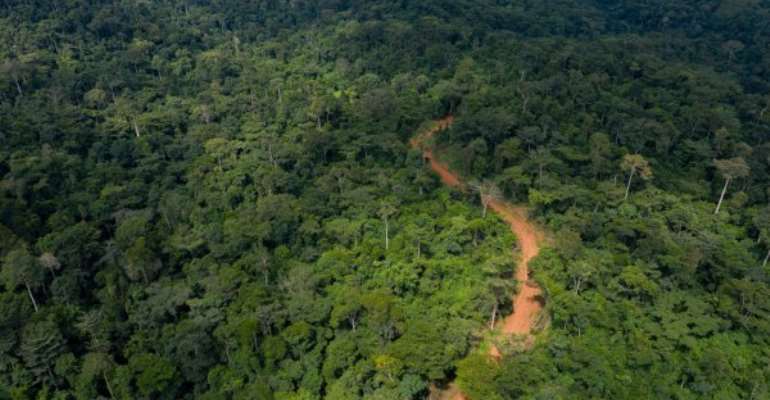 Licensed timber contractors who have privately recruited and armed security guards to guard their timber concessions have been warned to either disarm those guards or their licenses would be withdrawn by the Forestry Services Division (FSD).

It is meant to create secured atmosphere for security guards of FSD to carry out regular checks and ward off or arrest illegal loggers (chain saw operators) to protect forest reserves.

Mr. Ebenezer Mensah, the FSD Manager for the Dormaa Forest District gave the directive at a meeting organised at the behest of Osagyefo Oseadeeyo Agyeman Badu II, the Paramount Chief of Dormaa Traditional Area at Dormaa-Ahenkro in the Dormaa Central Municipality of the Bono Region.

The meeting attended by chiefs, concessioners of forest reserves in the Dormaa Forest District and other stakeholders is aimed at finding practical ways to halt the activities of unscrupulous persons who illegally plundered forest resources, mostly trees.

He cited illegal loggers who entered forest reserves, particularly the Mpamesu forest wielding guns to fell trees, saying the situation thus created a sense of insecurity, fear and danger for and among the people in such areas.

Mr. Mensah said high level of commitment was needed to prevent the illegal timber loggers from operating, but he disclosed the challenge was, whenever arrest was made, some very influential persons, normally relatives of the culprits in the area intervened to thwart the process to prosecute them.

Chief Superintendent Boakye Ansah, the Dormaa Central Municipal Police Commander said it was illegal for concessioners to engage the services of armed-security guards to assist them to guard their forest concessions when the law did not permit them to do so.

"A Police officer would not be scared to undertake regular patrols in the forest if he is sure not to meet or find a gun wielding illegal chainsaw operator/s in the forest", C/Supt. Ansah said.

He therefore stressed the need for the contractors to withdraw their armed forest guards as a vital step for the FSD guards to have high sense of security to work or face license withdrawal by the FSD.

Mr. Drissa Ouattara, the caretaker Municipal Chief Executive for Dormaa Central reiterated government's commitment to eradicating poverty among the populace adding that government would not sacrifice that to satisfy the interest of few others who harboured evil agenda, motivated and driven by selfishness and greediness to deplete forest resources.

Barimah Oppong Yaw Boabasa, the Gyaasehene of Dormaa Traditional Area, who deputized for Osagyefo Agyeman Badu II charged timber contractors who recruited gangs from Kasapin and Mim to guard their concessions in the Mpamesu Forest Reserve to discontinue with the services of such illegal guards.