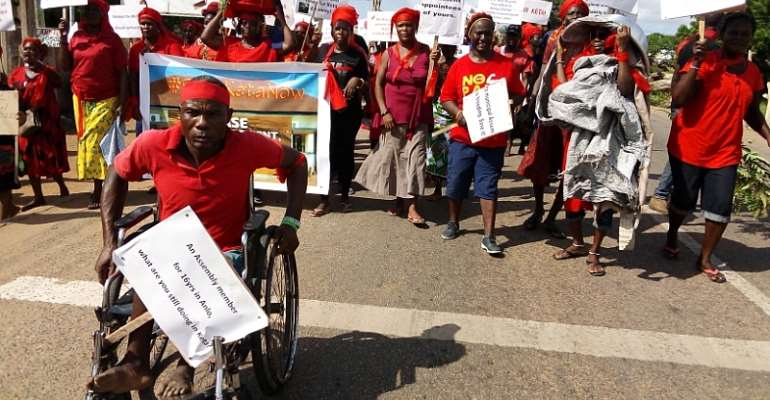 A group calling itself concerned citizens of Anloland led by Mr Wonder Setsoafia Denu have staged a demonstration at Keta in the Keta Municipality of the Volta region on Wednesday May, 12 to express their displeasure over what they described as financial embezzlement by some authorities of the Assembly.

Mr Denu, the convenor of the group disclosed to ModernGhana News that, the assembly has been involved in several financial irregularities that are bringing the entire municipality to a standstill.

He alleged that, all the officeholders in the assembly have in one way or the other been involved in some financial malfeasance and need to be investigated thoroughly.

Mr Denu continued that, a sum of GH₵96,000 has been paid to contractors for ten 300 litre poly tanks and drilling of two bole holes. He added that no one has been made to account for that.

This, he said happened under the watch of Mr Edudzi Effa (MCE), Mr Makafui Kofi Wanya the Development sub-committee chairman of the Assembly and Mr Dekpor the Municipal Coordinating Director.

Mr Lumor Godwin, a member of the group in an exclusive interview with ModernGhana News disclosed that Keta Municipal Assembly has been in the news for the bad reasons because of bad administration by some top officials of the assembly.

He alleged that Keta reclaimed land has been sold by some members of the assembly whilst others shared the rest of the lands among themselves.

"They demonstrated their mismanagements on various radio stations trying to defend themselves and we got to know of this," he continued.

Asked why their petition was not presented to Mr Edudzi Effa, the Municipal Chief Executive (MCE), Mr Lumor explained that, all the rots happened under his watch and he is in one way or the other involved in the alleged case.

"All the rots happened under his watch and he did nothing about it. They looted our cash and took away our pride as Anlo citizens and they need to be investigated and those found culpable must face the law," he posited.

The youths also accused Mr Makafui Kofi Wanya, the current Volta regional chairman of the ruling New Patriotic Party (NPP) who doubled as the government appointee is the brainchild of all the rots occurring at the municipal assembly.

The group accused him of withdrawing an amount of ₵150,000.00 from the assembly's common fund for a project which he could not account for.

The youths disclosed that Mr Wanya's 19years of experience at the assembly was useless since they did not gain any development from him. As if that was not enough, the group alleged that he rather connived with other compatriots to loot the assembly's cuffers.

They also accused him of leasing the Keta reclaimed land to himself where he built SanCity radio in Keta and shared some to family and friends using his power as government appointee of the assembly.

They also accused Mr Dzudzorli Gakpe, Member of Parliament (MP) for Keta constituency, Mr Godwin Effa, the Municipal Chief Executive, Mr Gilbert Keklie, the Chairman of Finance Committee of the assembly who doubled as Chief Executive Officer (CEO) for Kekeli consult and many other individuals of grabbing the Keta reclaimed land to themselves with some paying in instalment.

Leaders of the group say their checks show monies meant for persons with disability (PWDs), covid-19 relief fund and other monies from the assembly were misused and contracts been shared among themselves.

According to the group, the amazing thing was how the assembly failed to account for ₵61,281,38.00 allocated for only one market shade in the Keta market.

A delegation of group leaders were selected to take the petition to Dr Archibald Yao Letsa, the Volta Regional Minister to be delivered to President Akufo-Addo to address their issues.

The Youths of Anloland are also demanding proper investigations into the alleged financial mismanagement and high level of corruption at the assembly.