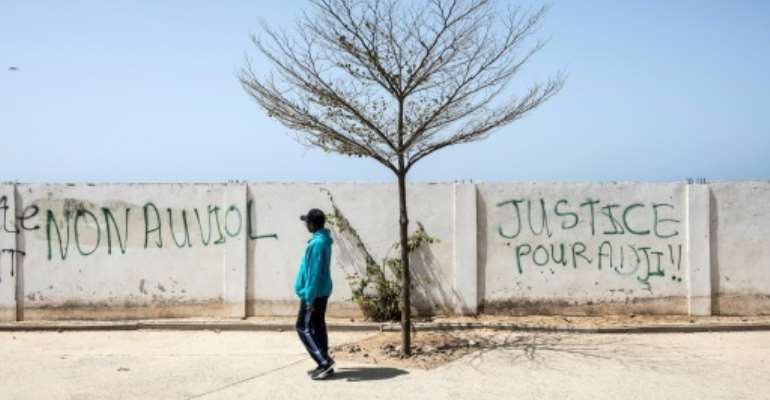 Grafitti in Senegal's Dakar reads "Justice for Adji", referring to the woman who has accused the opposition leader of rape. By JOHN WESSELS (AFP/File)

Adji Sarr, who has accused Senegal's opposition leader of rape, has learned the consequences of speaking out about sexual abuse in the conservative West African country the hard way.

Sarr, who is in her early 20s, in February told police that opposition leader Ousmane Sonko had forced her to sleep with him on several occasions and threatened reprisals if she refused.

The move sparked a political firestorm in Senegal: Sonko's subsequent arrest triggered the worst unrest the usually tranquil country had seen in years.

Thousands of mostly young people took to the streets in nationwide demonstrations in which at least 10 people were killed. Protesters also looted shops, hurled stones at police and torched cars during the demonstrations.

The unrest only abated after a judge released Sonko from detention in March and President Macky Sall lifted unpopular coronavirus-related restrictions.

To supporters of Sonko, his legal troubles fit a perceived pattern of politically motivated court cases against rivals of the president. Many also believe that Sarr invented the accusation.

Opposition leader Ousmane Sonko was released from detention over rape charges after his arrest sparked unrest. By Seyllou (AFP/File)

A devout Muslim who is fiercely critical of Senegal's elite, 46-year-old Sonko denies the charge against him and has accused Sall of engineering it -- which the president in turn denied.

Sarr has meanwhile gone into hiding over fears for her own safety, according to her lawyers.

Some worry that the controversy will silence other women from speaking out about sexual abuse.

"The victims will say to themselves: 'If I talk about what I've endured, will I not suffer the same fate as Adji Sarr?" said Senegalese sociologist Selly Ba.

Seeking to 'demonise' her

More than eight percent of Senegalese women report that they have suffered sexual violence, according to a 2017 report by the country's statistics agency.

Rape was formerly classed as a misdemeanour under Senegalese law. But the government criminalised rape in 2019 after several widely publicised instances of sexual abuse in the nation of 16 million people.

Yet changing attitudes to rape in the Muslim-majority country did not appear to catch up to Sarr -- even some feminist organisations were reluctant to address the affair.

Senegalese writer Hamidou Anne told AFP that Sarr had been erased and "discredited" during the politicised debate surrounding Sonko.

Sarr herself responded to doubters in a television interview in March. "If Ousmane Sonko has never slept with me, let him swear on the Koran," she said.

"The judiciary needs to do its work," Sarr added. "I am in a hurry for it to do so because I am not free".

In the wake of the protests, a Senegalese television producer wrote a script for a fictional series modelled on the Sarr affair, but dropped the project in April.

One of Sarr's lawyers El Hadji Diou said that the script portrayed the protagonist "as a prostitute".

"I find this cruel, inhuman and shameful," he said at the time, adding that some people were seeking to "demonise (and) discredit" his client.

Francoise-Helene Gaye, a woman who founded a collective to support Sarr, said she came under pressure to disavow the young woman.

She added that she had received messages of support from rape survivors, however.

Although Sonko was released, the rape charge against him still stands. It is not clear when he will face a court date.

Feminist activist Maimouna Yade said that ongoing legal proceedings against the opposition leader offered some hope, adding that she wanted a solution that is "fair to both parties".

"Civil society must follow the progress of this case very closely, it is crucial for the future of women's rights in our country," Yade said.