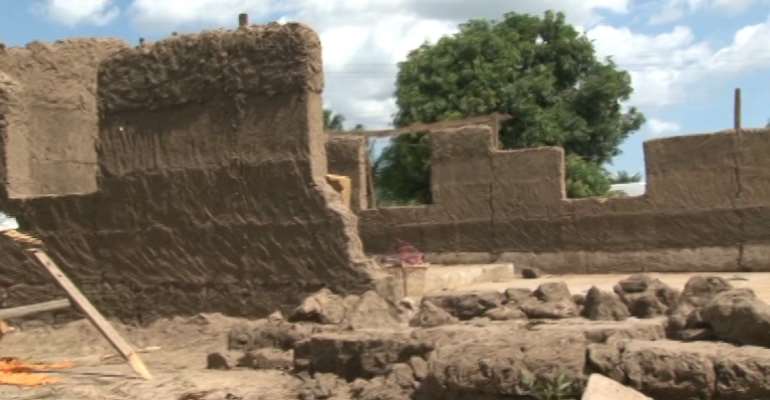 Torrential rains and violent wind in Mafi-Kumase in the Central Tongu District of the Volta Region has left many homeless and killed a 12-year-old boy when a church building collapsed on him.

The rains visited the district visited unannounced ripping off the roofs of homes, collapsing buildings and breaking trees in the area.

The 12-year-old, Mathias Gbleza and some of the residents of the area saw a safe haven in the mud church and sought refuge, but unfortunately young Mathias was trapped and killed when the church walls fell.

The mother of Mathias could not hide her grief when she confirmed the death of her son to TV3’s Komla Klutse.

“They searched for my son thinking he was carried away by the running water only for them to find his clothes in the church building. Upon further search, he was found among the debris from the broken wall.”

Victims of the storm are still counting their losses and some putting up with unaffected family and friends and are also calling on the Assembly to come to their aid.

Speaking to the Member of Parliament for the area, Hottordze Alexander Roosevelt, said “the situation is overwhelming and calling for external support.”

“I had intended to look out for support but the unfortunate thing is that my MP development account is in red now but I will move round to source some funding and offer them some support.”

The District Assembly and the District NADMO office also say they are constrained and are unable to help at the moment.

The District NADMO Officer said, “the estimate we are working on is about Ghs315,000 to re-roof some of the ripped off buildings especially school buildings and then some individual houses and also buy relief items for the affected victims.”

“Looking at the level of destruction, what NADMO has nothing now cannot do nothing and it will be dangerous to introduce anything into the system,” he added.

The Assembly said it will resort to issuing a directive which will require anyone wanting to build to obtain a building permit from the Assembly in order to prevent people building on waterways.