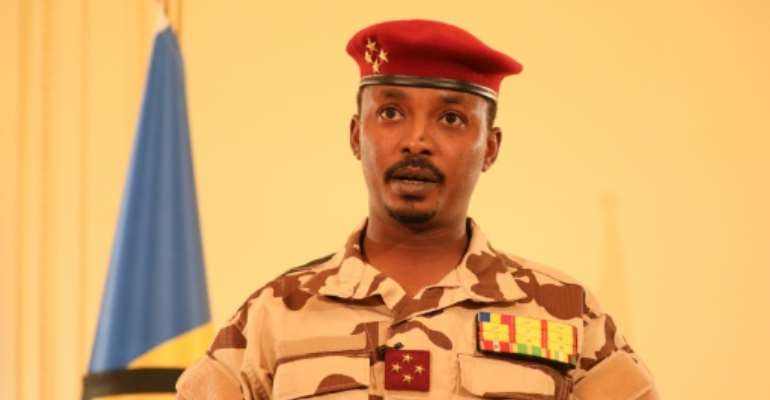 General Mahamat Idriss Deby, 37, heads a junta that took over after the death of his father last month. By Brahim ADJI (Tchad Presidential Palace/AFP)

Chad's new leader, General Mahamat Idriss Deby, on Monday made his first visit to Niger, a fellow Sahel country fighting jihadist insurgents, since coming to power at the head of a military junta after the shock death of his father last month.

After arriving in Niamey, the Niger capital, the 37-year-old general held talks with newly elected President Mohamed Bazoum, an aide to Bazoum said.

He was then scheduled to head to the west of the country to meet Chadian troops deployed under a regional anti-jihadist mission.

Deby "came to see his troops (who are deployed) in Tera, and he used the occasion to hold talks" with Bazoum, the source said, without giving further details.

Chad's army is one of Africa's most effective. By - (AFP/File)

Chad has 1,200 troops in western Niger under a five-nation initiative, the G5 Sahel, aimed at pooling military resources to fight an expanding jihadist insurgency in the region.

The Chadian military has high standing in the region as a relatively well-equipped and -trained force.

Deby, in brief remarks to the Nigerien media, said, "We came here to affirm our friendship... to thank President Bazoum for all his support since the death of Field Marshal (Deby). We also came to show our support for our forces in Tera."

Thousands of people have been killed and more than a million have fled their homes since a jihadist revolt began in northern Mali in 2012 and spread to Burkina Faso and Niger in 2015.

Niger, the poorest country in the world by the yardstick of the UN's Human Development Index, is also struggling with jihadist attacks in its southeast, coming from neighbouring Nigeria.

Deby died, according to the authorities, on April 19 after suffering mortal wounds fighting the Front for Change and Concord in Chad (FACT), a large armed group with a rear base in Libya.

The new junta appointed a transitional civilian government and promised to hold elections within 18 months.

The Chadian military on Sunday presented a group of captured rebels together with their confiscated weapons and vehicles. By Djimet WICHE (AFP)

On Sunday, the junta declared victory over the rebels, staging a parade with several hundred army vehicles, including tanks, and 156 captives that they described as FACT prisoners.

Bazoum last month was named by the G5 Sahel as a "facilitator" between the new Chadian authorities and FACT.