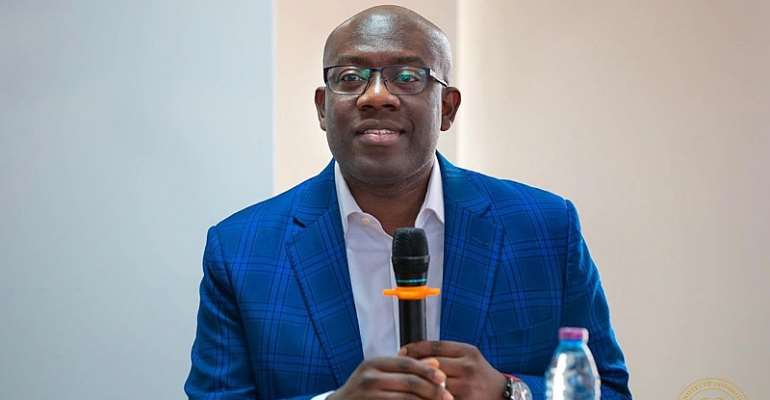 Minister of information and Member of Parliament for Ofoase - Ayeribi constituency, Hon. Kojo Oppong Nkrumah on Saturday May 8, 2021 engaged journalists in the Savannah Region as part of the duty tour of the Ministry of Information to the five Northern Regions.

The tour the minister disclosed was part of the Government's arm of communication ( Information Ministry's ) quest to further strengthen the relationship between the "fourth estate of the realm" ( media ) and the government.

The sector minister indicated that government is committed to ensuring that journalists go about their duties in an atmosphere of peace, tranquillity and free from any form of intimidation.

He further asserted that the immense contribution of the media towards the growth of Ghana's Democracy over the past years has been widely applauded across the globe regardless of the many reports of assaults on journalists.

Touching on the rights and freedoms of the media, Mr. Oppong Nkrumah averred that the NPP administration over the years have made tremendous strides in deepening the freedoms of journalists as provided in chapter 12 of the 1992 Constitution highlighting the revocation of the criminal libel law by the Kufour administration as one of the many efforts.

"The Kufour administration revoked the criminal libel law which meant that even if you were libelous of somebody, a criminal option will not be occasioned and beyond that, the same administration provided the International press center to support the work of journalists ".

On what the current administration led by President Akufo-Addo has done to further enhance the everyday activities of journalists devoid of harassment, he said, " upon the assumption of office by Akufo-Addo as president, we have gone a step further to pass the Right to Information Bill which ensures that you as a journalist can get access to information from public offices not at the whims and caprices of any public official as a matter of right by law ".

He charge journalists in his final remarks to endeavor to report on the Region's potential and issues that will bring accelerated development to the infant Savannah Region.

Veteran media practitioner and Savannah Regional correspondent for JoyNews, a subsidiary of Multimedia Ghana, Mr. Isaac Nonya on behalf of the journalists in the Region, expressed gratitude for the opportunity to engage with the Minister and assured the minister of the readiness of the journalists to contribute their quota to the socio-economic development of the country.

Four suspects arrested over attacks on motorists along GIMPA...
58 minutes ago

Chinese man crushed to death at Suhum
58 minutes ago