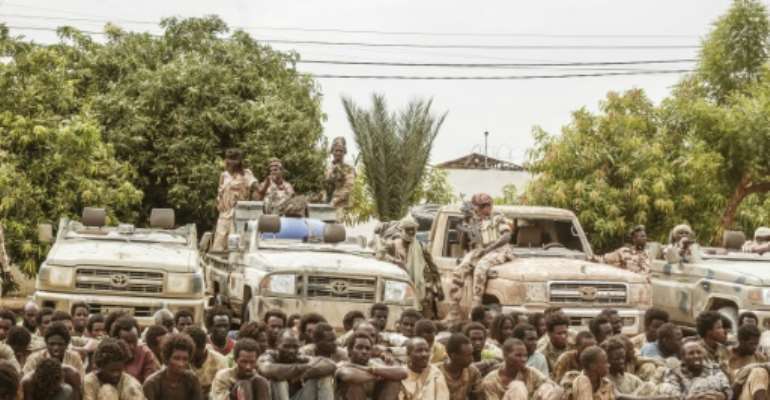 The army presented 156 FACT prisoners as well as several seized vehicles to the press. By Djimet WICHE (AFP)

Chad's military junta on Sunday declared victory after a month-long operation against rebels in the northwest of the Sahel country, parading 156 prisoners before the press in the capital N'Djamena.

Fighting erupted on April 11, the day of a presidential election that returned the long-serving incumbent Idriss Deby Itno to power.

Deby was killed days later in fighting with the Front for Change and Concord in Chad (FACT), a large armed group with a rear base in Libya.

That led to the formation of a military junta led by his son Mahamat Idriss Deby.

"War came and we were able to bring the situation under control... The situation is back to normal," said army chief of staff Abakar Abdelkerim Daoud. "It's all over, the national territory has been secured."

Several hundred army vehicles including tanks paraded in N'Djamena, and the army presented 156 FACT prisoners to the press along with many seized vehicles, an AFP reporter saw.

A prisoner identified as FACT's chief of military operations, Bechir Mahadi, called for the Chadian authorities to respect the rights of prisoners of war.

Mahadi also called on "those who are still in the rebellion outside the country (in Libya) to return to legality and contribute to the building of a democratic country".

Since the start of the offensive, the army has claimed to have killed several hundred FACT rebels.

The new military junta in the former French colony has promised democratic elections within 18 months.

Any reasonable government will prioritize the abandoned proj...
18 minutes ago