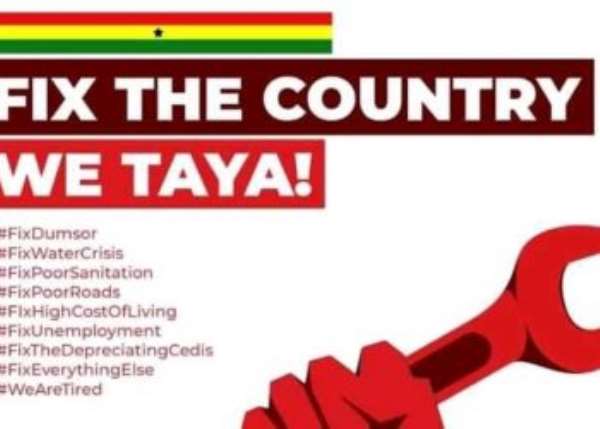 Conveners of social media campaign, #FixTheCountry are unhappy with the Supreme Court’s decision to set June 8 as the date to hear their appeal seeking to have an injunction stopping their planned demonstration on May 9 overturned.

According to the group, the date creates a lot of inconveniences looking at the exigency of the matter.

The group declared its intention to protest on May 9, 2021, however, the Ghana Police Service secured an ex-parte injunction against the protest.

The court ruled that the planned demonstration is prohibited until the restriction on public gathering is lifted.

But the group has dragged the matter to the Supreme Court with the hope of getting the apex court to quash the High Court’s order.

It thus raised concerns that the development hinders their quest to demonstrate on May 9, 2021, as scheduled and has served notice to file for an abridgement of time.

“We have received news that the Supreme Court has fixed the hearing for 8th June 2021. We are naturally disappointed by this decision. As a result, we shall at the earliest opportunity file an application for abridgement time, with the hope that the Supreme Court will hear the matter at an earlier date,” a statement issued by conveners of the campaign noted.

Here is the full statement from the group:

As you may have heard, yesterday the 6th of May 2021 the Ghana Police Service obtained an order prohibiting us from exercising our rights under the 1992 Constitution to embark on the planned May 9 Protest.

The order was granted to the Police despite an existing decision by a Judge of the Court of Appeal saying that the Police cannot seek nor obtain an order to prohibit a protest without notifying the organizers.

Earlier today, our lawyers working through the night, filed an application at the Supreme Court seeking to set aside the defective order made by the High Court Judge. It was our hope that in view of the urgency of the matter, and having regard to the grave injustice caused, that extraordinary measures will be taken to expedite the hearing of the matter, to enable us to proceed with the protest on Sunday, May 9th.

However, we have just received news that the Supreme Court has fixed the hearing for 8th June 2021. We are naturally disappointed by this decision, but we continue to place our faith in the Courts. As a result, we shall at the earliest opportunity file an application for abridgement time, with the hope that the Court will hear the matter at an earlier date.

We shall update you in a few hours on our next cause of action regarding the protest.

We assure you all that we will not relent, retreat nor surrender.

Keep up the Faith and the Fight!