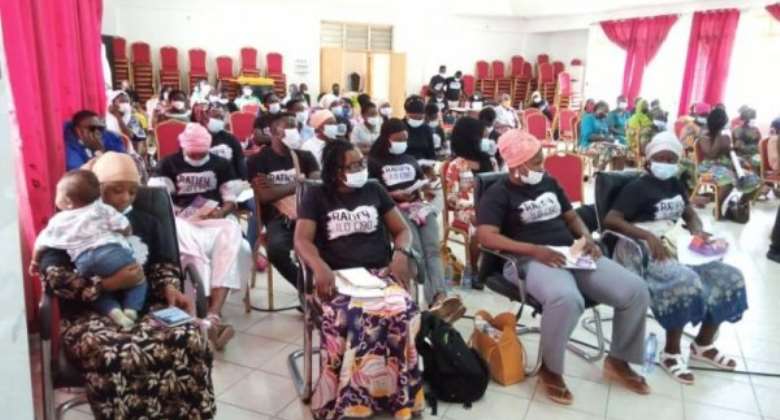 Informal sector workers among others have petitioned the government to ratify the International Labour Organization (ILO) Convention 190 to outlaw gender-based violence and sexual harassment in the world of work.

Representatives of the Informal Sector Workers, Smallholder Women Farmers, the Trades Union Congress (TUC), and youth groups from across the Upper West Region signed the petition.

Madam Elizabeth Gbeele, a Representative of the TUC, presented the petition to Mr Peter M. Maala, the Chief Director of the Upper West Regional Coordinating Council (RCC), who received it on behalf of the Regional Minister, Dr Hafiz Bin Salih in Wa.

In June 2019, at its 108th Session in Geneva, the ILO adopted the Violence and Harassment Convention (C190) to outlaw these practices in the world of work.

The ILO also acknowledged that gender-based violence and harassment disproportionately affected women and girls and constituted human rights violation as well as a threat to equal opportunities.

The petition pointed out that despite calls from state and non-state actors in the country to the government to ratify ILO C190, the state was yet to do so.

“We believe that the ratification and proper implementation of ILO C190 would be urgent to address the scourge of violence and harassment in the world of work,” it said.

The petition noted that across the globe, there were rising and persistent cases of domestic and gender-based violence and harassment in homes and informal workspaces.

It revealed that research conducted by ActionAid Ghana with a focus on young urban women in the informal sector indicated that 44 per cent of respondents suffered repeated sexually-oriented behaviour such as touching, rubbing, or groping, 49 percent were found to be sexually abused in the world of work, whereas 41 per cent were sexually harassed more than once.

On why Government must ratify the ILO C190, the petition noted that it contained a comprehensive understanding of gender-based violence and would protect both formal and informal workers in the country against violence and harassment and prevent such behaviours and practices.

Ratifying ILO C190 would not only show the government's commitment to its membership of the ILO but also to the 88 percent of vulnerable informal sector workers.

She noted, therefore, that ActionAid created the platform for representatives of the various groups to support the call on the government to ratify the ILO C190 to guarantee a safer working environment for all workers, particularly those working in the informal sector.

Mr Maala, who received the petition on behalf of the Regional Minister, noted that gender-based violence was real, especially in very patriarchal societies and assured that the petition would be forwarded to the appropriate authorities to act on.

Madam Charity Batuure, the Acting Regional Director of the Department of Gender, urged the people not to endure any form of abuse or harassment in their work places.

“The fact that you are working for someone does not mean that your dignity as a human being should be taken for granted,” she said.

Madam Batuure urged them to report any form of abuse to the Domestic Violence and Victims Support Unit (DOVVSU) of the Ghana Police Service, the Commission on Human Rights and Administrative Justice (CHRAJ), the Social Welfare Department, or the Department of Gender for help.

No one is above the law except the President - Oliver Barker...
2 minutes ago