Propaganda Against The Anti-Galamsey Struggle Is On The Rise 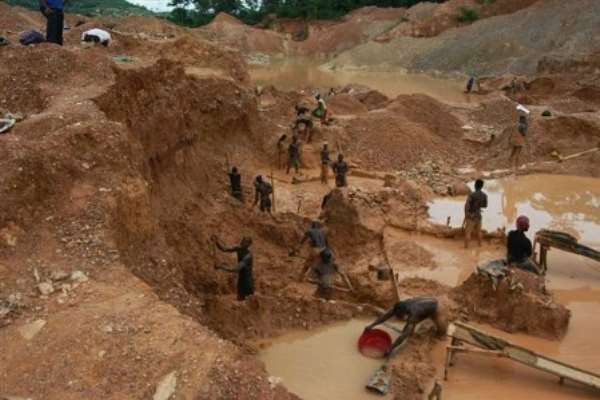 Evidence that this country's propaganda landscape has changed beyond measure is provided by the fact that less than a week after the President had ordered a new initiative by the armed forces, against galamsey operations on our rivers and water, at least two major videos have appeared on the Internet, tearing the new effort to shreds. ALREADY!

And a report is being circulated on the Internet, claiming that a recording has been intercepted in which a big NPP man in the Ashanti region confesses to having paid “a one-million-dollar bribe” in order to obtain a mineral concession!

We are yet to see whether the “recording” will not be secretly “appropriated” from its peddlers and put out of circulation. For were it to be proved authentic, it would make the man's official position in the NPP untenable. He would become an irrefutable reproach to the party, as he would not only constitute a danger to public safety by promoting galamsey but also, he would be assessed as not even possessing the intelligence not to expose “his” own party to ridicule. I mean, to confess to having paid a bribe of one million dollars , in a country whose opposition has been accused (by your own party) of having benefited from Woyomistic largesse? Come on!

Now, back to the video propagandists: they are not the usual “ranter” type, whom one can dismiss out of hand immediately they sail into the beguiling waters of the Queen's English. Both these guys are well spoken and they alternate between Twi and English with the greatest of ease. Not only that – they effortlessly disparage the logic of the official line, as they pick up holes from news items reporting statements by representatives of the Government.

The more dangerous propagandist – because he appears personable and relaxed – “shares” with his viewers, his “well-researched” conclusion that the Government is once again being duplicitous with the public over its anti-galamsey stance.

“You see what they are doing now?” he asks. “Because Ghanaians have been asking questions about where the previously seized excavators are, they now say that when they seize excavators, they will burn them on the site where they were seized! If they have been “burnt,” you can't ask for their whereabouts, can you?” And he chuckles: hahahaha!

Now, his is an posture that cannot be ignored. I have warned the Government before, myself, that if you allow your credibility to be punctured, someone else will fill the vacuum. And here we are.

What the Government has said, as one report puts it, is:

“Unlike previous attempts to flush out illegal miners from Ghana’s water bodies and forest reserves, the Government has announced that all equipment that will be seized under a new effort to end galamsey will be destroyed on-site. The operation, which involves the deployment of 200 military personnel, [has] already [resulted in ]nine excavators, 127 changfans (washing machines), and one fuel pump which were being used for illegal mining in the river Pra, [being] have destroyed [detonated] by the military.

“The exercise on the Pra dubbed “Operation Halt”.... also resulted in the arrest of two Chinese nationals at Anttieku, near Twifo Praso, in the Central Region for illegally mining in a forest reserve. Addressing a press briefing on the military operation... the Minister of Defence, Mr Dominic Nitiwul said the Chinese had been handed over to the national security for further interrogation and would be prosecuted.

He said: “It is noted that since the commencement of the operation, the troops have destroyed a good deal of equipment, including nine excavators, 127 changfans -machine platforms associated with mining, and one fuel pump. Furthermore, the following items have been seized and would be destroyed, except items that will be used as exhibits in court. The items include 8×24 plate batteries, one pump-action gun case, a generator, Huawei phone, chainsaw machine, eight raincoats, fuel filters, non-citizen Ghana ID cards, two drilling equipment, and two boots. These items will be destroyed except what the police deem necessary for their work for prosecution.

Mr Nitiwul continued: "The law already outlaws mining within the river bodies and 100 metres to each of the flanks of [a] river. If you do any activity there, it is an illegal activity. The President has directed that we clean up the river bodies and like I said, we are not taking any equipment home, we are not seizing any equipment, no equipment will be returned home. It's not like before, where you will seize equipment. They will all be destroyed on-site, it is as simple as that.” UNQUOTE

Well, the propagandists are laughing. “You say you have burned them. But why should we take your word for it? Didn't you tell us before that you had taken seized equipment to the police for safe-keeping? Or to the government installations in the districts? But didn't they end up back in the hands of the owners, who knew what telephone numbers to call to have their equipment released back to them? “

These rhetorical questions are, of course, eagerly swallowed by Joe Public,, who is getting increasingly angry that he has to spend more and more money buying sachet water or bottled water to meet the needs of his family. Because Ghana's natural water-supplies are almost all polluted by galemseyers.

Maybe the only answer to public scepticism would be for the Government to designate a location as a “seized illegal mining equipment crematorium”?

Yes, why not? “Saturday 11.30 a.m. Public burning of seized excavators, bulldozers and changfans. At such and such a location. Face masks will be obligatory. Social distancing will be strictly observed, Come one, come all!”

You see? What did I say about the consequences of a Government losing its credibility?

The second propagandist on the Net is even more pernicious in his assertions. Sounding like someone who knows China well, he claims he has seen “plans” by the Chinese, not only to destroy our rivers and water-bodies, but also, to poison our farmlands by saturating them with chemicals to an extent whereby the countries of the “European Union” (who, he alleges, are already complaining about the quality of Ghana's cocoa) will stop buying cocoa from Ghana.

He then shows pictures of “Chinese nationals” learning how to plant and harvest cocoa! “China will supplant Ghana as a supplier of cocoa to the European Union and other chocolate-manufacturing countries,” he says without flinching.

He adds, for good measure, the speculation that “When Ghana cannot earn foreign exchange any longer from the sale of cocoa, she will have to borrow more money from China! And Ghanaians will become the servants of the Chinese!”

I have written before that China, with its extremely well-developed systems of public surveillance and record-keeping, should make sure that no Chinese with criminal convictions, are allowed to leave China to come to Ghana. The criminals must not be allowed to destroy the friendship between China and Ghana, which has been very strong frfor a long time.

Ghana must not be caught pants down in future, let's find av...
42 minutes ago

Sputnik V saga: ‘Why should I be a subject of ridicule for b...
49 minutes ago