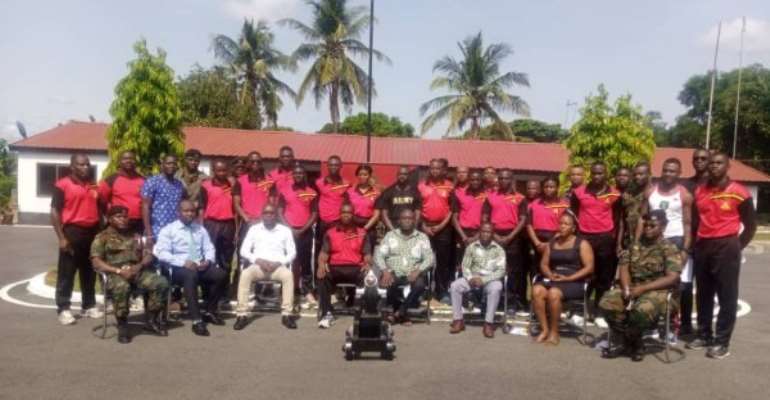 Lieutenant Colonel Edward Sarpong Appiah, Commanding Officer, the 66 Artillery Regiment in Ho, has assured citizens that the military will not relent in efforts to protect the Constitution, which is the supreme law of the land.

He said the military was conscious of its role to defend the Constitution at all times and would not shy away from that responsibility, adding that they would resist any attempt by any person or group of persons to overthrow the Constitution.

“On behalf of the Military High Command, we will defend the 1992 Constitution because, it is our duty and core mandate, and also we will resist any attempt by any individual or group of persons to overthrow the constitution of Ghana,” he stated.

Lt. Col. Appiah gave the assurance during an encounter with the National Commission for Civil Education (NCCE) as part of the Constitution Week Celebration, and called on the citizens to assist the military in any way possible to achieve its mandate.

He asked them to extricate themselves from acts that would infringe on the rights of the citizens but rather ensured protection of the fundamental human rights of all citizens.

Mr Kponor said no one was above the law, therefore, they should ensure that their conduct and activities were within the confines of the law.

The Director said any infraction of the principles, which they swore to uphold would send a negative signal to the larger society, therefore they have to protect the sanctity of the military profession.

The security must be conscious of the Constitution and guard against any abuse or violation of it, he added.

Mr Kponor encouraged the officers to get copies of the Constitution, read it to know its tenets.

Mr Gagakuma Setriakor, Ho Municipal Director of the Commission, called on Ghanaians to lay aside their various political backgrounds and defend the good name of the country.

He said it was important for the citizens to project the name of the country in their daily undertakings as one people with a common destiny.

The Commission gave copies of the Constitution to the Commanding Officer and other officers who excelled during a quiz part of the engagement.