E/R: Student flogged 25 times at St. Stephens SHS despite law against it 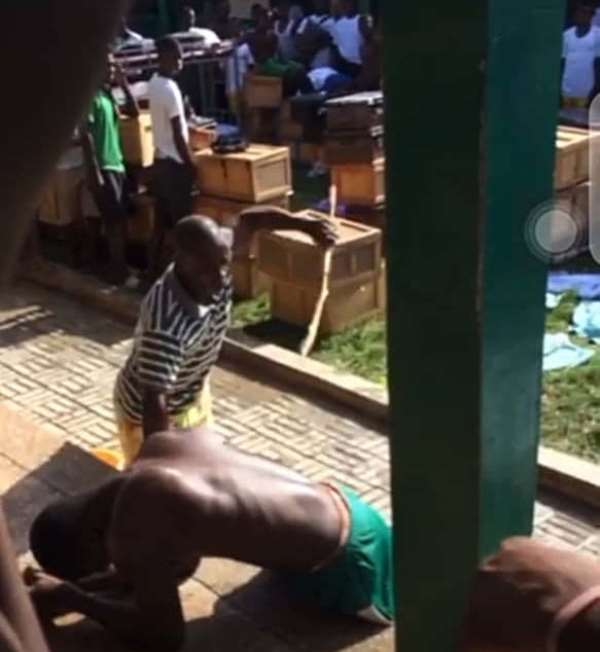 A teacher at St. Stephens Senior High and Technical School (STEPSS) in Akyem Asiakwa near Kyebi in the Eastern Region has given a male student 25 strokes with a cane for assaulting another student.

A leaked video captured the teacher identified only as Sir Amable whipping the student who was only wearing shorts and lying in a push-up position in the open while other students were watching.

The senior housemaster reportedly flogged the student for assaulting another student at the boarding house leading to hospitalization of the student.

The punishment adopted by the Senior Housemaster has, however, sparked uproar considering that corporal punishment has been banned in schools by the Ghana Education Service (GES).

The leadership of the old Students Association of the school has engaged the School authorities on the matter in a crunch meeting.

The headmaster of STEPSS said he was unaware of the incident promising to investigate.

Some students alleged that the senior housemaster is notorious for mercilessly lashing students.

A similar incident occurred on October 29, 2020, at WBM Senior High School at Akyem Old Tafo in the same enclave.

Two students of the school were reportedly lashed mercilessly by the Senior House Master identified as Mr Dagar resulting in severe injuries of one of them-Patrick Frimpong- a form-two General Arts student.

The students were flogged by the Senior House Master for mocking him.