Once a stop on the smuggling route, Kenya becomes heroin hub 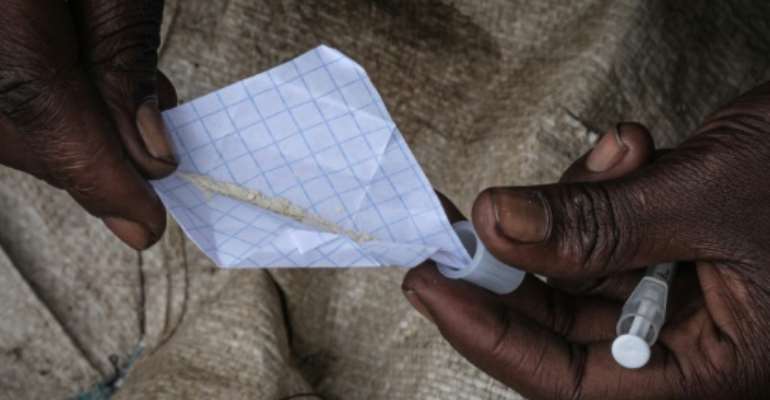 Esther Wanjiru started using heroin at 16 to dull the pain after her baby died, first smoking, and now injecting the opioid which has become increasingly cheap and abundant in Kenya.

"I am a heavy junkie, I usually need two doses," said Wanjiru, 22, as she puts the needle to a damaged vein, surrounded by about 60 other addicts in a clearing behind a church in a Nairobi slum.

Once just a passing stop on the trafficking route to Europe, Kenya is becoming a major destination in itself for heroin, with addiction rising as tonnes of powder pass through East Africa.

These days a hit costs as little as 120 shillings (USD$1.10/0.90 euros), creating a devastating path to dependence for poor, troubled Kenyans like Wanjiru.

Wanjiru says she will do anything -- even crime or prostitution -- to get hold of the drug.

Kenya was once a hub for heroin trafficking to Europe before becoming a market itself -- the drug is a cheap and highly addictive hit for poor people. By Yasuyoshi CHIBA (AFP)

Heroin once reached Europe via the "Balkan Route": smuggled from the poppy fields of Afghanistan overland through the Middle East to capitals in the west.

But the Syrian conflict and border controls that tightened as waves of migrants sought refuge in Europe forced traffickers to change tack.

They turned to the sea to get around the problem. Heroin was put on ships and sailed across the Indian Ocean to the porous eastern coast of Africa, and muled northward to Europe.

Mombasa became the main port of arrival. Kenya, a beacon of security in a volatile region, but rife with corruption and lacking oversight, offered smugglers a reliable place to offload their product.

"Narcotraffickers are really identifying Kenya as being one of the most stable countries in the region," said Amado De Andres, a former regional director for East Africa at the United Nations Office on Drugs and Crime (UNODC).

The lion's share of the heroin hauled ashore -- estimated by UNODC at 42 tonnes annually -- was earmarked for distant markets.

Traffickers kept around five tonnes aside for regional sale as demand for heroin flourished into a $150-million (125-million-euro) business, with most buyers in Kenya.

"Kenya was formerly a transit route, and has increasingly become a destination for heroin," said Victor Okioma, the head of the government-run National Authority for the Campaign Against Alcohol and Drug Abuse (NACADA).

In 2018, the Ministry of Health estimated 27,000 people were injecting or smoking heroin in a survey of one-third of Kenya's counties.

Help: A heroin addict gets medication at a clinic run by Doctors Without Borders (MSF) in Karuri. By Yasuyoshi CHIBA (AFP)

It is now the second-most consumed drug in the country of nearly 50 million behind cannabis, NACADA says.

"Heroin is being consumed even in primary schools," he said.

Kenya created a coastguard in 2018, bolstered container checks at Mombasa's ports, and recently began participating in an Interpol-led drug detection program at its international airport in Nairobi.

Seizures of heroin and morphine have increased tenfold in Africa between 2008 and 2018 and the majority were made in East Africa, according to the UNODC.

But heroin still finds its way to users like Wanjiru, and others facing hard times.

"I can assure you, the number of users is growing also because now of the situation of Covid," John Kimani, the executive director of KeNPUD, a Kenyan harm reduction program.

Kenya has been expanding access to methadone, a heroin substitute, which helps keeps withdrawal symptoms at bay and allows addicts to wean off the drug.

Mock-ups of fruit and vegetable and fruits at an MSF clinic for heroin addicts, to help addicts learn about nutrition. By Yasuyoshi CHIBA (AFP)

The UNODC says there are around 10 clinics serving an estimated 7,000 heroin addicts in Kenya, but they can't reach all in need.

The nearest clinic to James Kwenga is on the other side of Nairobi, and transport costs about 150 shillings ($1.30, 1.16 euros).

"I can't afford that every day, because I don't have a job," said the homeless man. "If they can't come near here, many people can't beat this drug."