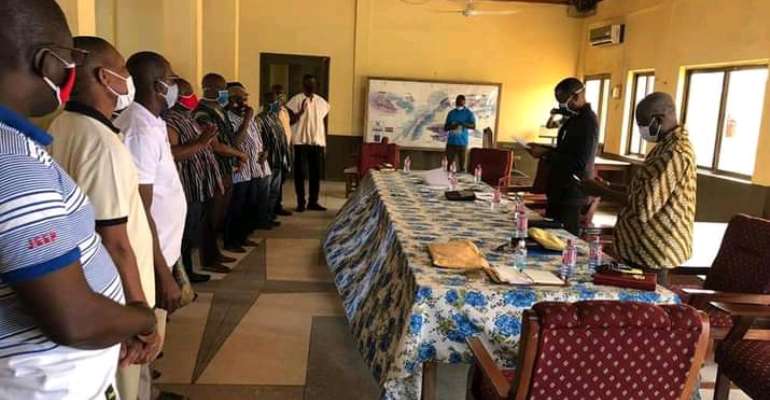 The Keta Municipal Assembly in the Volta Region has kicked out nine of its office holders over their alleged involvement in some financial misappropriations.

The officers according to the assembly, have caused financial loss to the Municipality and must vacate their post with immediate effect for investigations to begin.

Mr Amos Ametsime, the Presiding Member during the Assembly's meeting on Wednesday, April 28, disclosed that the nine officers have either connived or have been negligent.

He said, the decision to let the alleged officers vacate their posts was borne out of a unanimous decision by the Assembly members for investigations to commence into the matter.

Mr Ametsime said, the Assembly will put up a committee to investigate the case and those found culpable will refund the monies.

According to him, several funds meant for developmental projects in the Assembly were either misapplied or misappropriated through alleged dubious ways.

He added that several platforms were provided for the alleged persons to explain themselves but failed to avail themselves.

Further information chanced by ModernGhana News indicates that, an amount of GH₵111,000 said to have been allocated as covid-19 relief fund has been missing and cannot be accounted for by the Assembly.

Mr Gilbert Korbla Keklie, the Municipal Finance and Administration Sub-committee Chairman disclosed to the media that, about GH₵300,000.00 were budgeted for persons with disability (PWDs) in 2020 which the Administrator of the District Assembly Common Fund (DACF) transfered an amount of GH₵221,869.44 to the account.

He said the remaining GH₵136,860.31 which was mismanaged by the management of the Assembly cannot be accounted for.

He stated that, the same gross financial malfeasance is repeating itself this year and the Assembly has to be firm in dealing with it as quickly as possible before someone sells the entire Assembly to enrich him/herself.

ModernGhana News has discovered that the Keta Municipal Assembly is owing the Electricity Company of Ghana (ECG) some a huge amount of money which resulted in total disconnection of the Assembly for the past two weeks.

Mr John Ntibre, the Municipal Planning Officer and Mr Wisdom Ahadzi, the Municipal Stores Manager in a swift response to the allegations leveled against them stated to the media that they were innocent.

This financial malfeasance at the Assembly drew the attention of a group calling itself Concerned Citizens Of Anloland.

The group in a press statement dated 20th April, 2021 stated that it will embark on a peaceful demonstration to demand an investigation into the transfer of some management members of the Assembly without proper investigation as well as indiscriminate sale of the Keta Sea Defence Reclaimed Land.

The release which was signed by Mr Setsoafia Dey and Mr Divine Pechepey Amedzrovi, who are leaders of the group stated that, the demo will be staged on Saturday, May 8.

The group are expected to use the main principal streets of Keta starting from Keta Busco junction through to Tiregagbor to the Keta Municipal Assembly Hall compound.