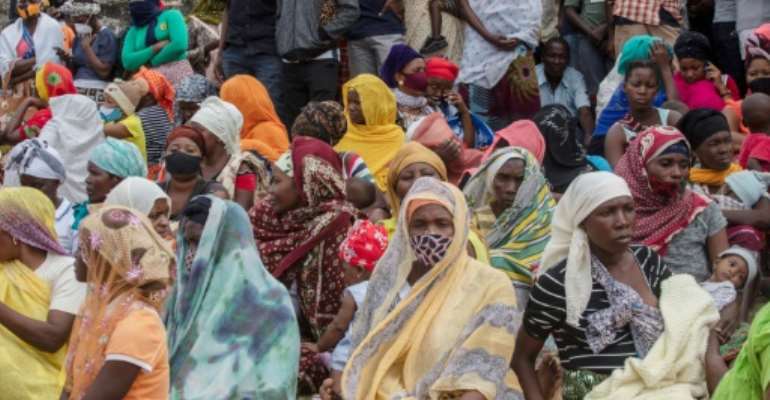 Families wait outside the port of Pemba to leave the town. By Alfredo Zuniga (AFP/File)

Six weeks after it was raided by Islamic State-linked fighters, the northern Mozambican town of Palma remains deeply traumatised and hundreds of its residents flee each day, survivors and aid workers say.

The jihadists swooped on the coastal town on March 24, killing dozens of people and triggering an exodus that included workers on a multi-billion-dollar liquefied natural gas (LNG) project.

The raids marked a major intensification in an insurgency that has wreaked havoc across Cabo Delgado province for over three years as the militants seek to establish a caliphate.

The violence pushed France's Total to suspend work on the nearby LNG scheme, one of Africa's largest. The dead include several expatriate oil workers.

After days of fighting, the government said its forces had driven out the extremists and that calm had returned.

But many people still feel unsafe and are leaving the area.

The town of Palma in northern Mozambique. By Kenan AUGEARD (AFP)

In recent days, hundreds have landed in the provincial capital Pemba on privately-organised rescue boats, a volunteer registering the displaced told AFP.

Viaze Juma, 34, a mother of four, arrived on Friday from Afungi, a peninsula near the heavily-guarded gas plant and five kilometres south of Palma, where thousands sought refuge during the attack.

"It's good that now I'm out of Palma. I'm safe but my house was burned down," she told AFP.

On the day Juma made it to Pemba, the United Nations announced that the number of internally displaced persons (IDPs) had breached the 30,000 mark.

Further inland, in Mueda and Nangade, up to 40 families arrive each day on foot, aid workers say.

The true picture of the security situation in Palma remains obscure.

Although cellphone communications and electricity -- cut off on the day of the attack -- have been restored, access to the town is still restricted for both the media and humanitarian organisations.

But the flight of tens of thousands of civilians in a month-and-a-half -- 6,000 of them in less than a week -- shows that order has not yet been fully restored.

"The situation in Palma is very unstable, (with) shooting at night," said an aid worker in Mueda, around 180 kilometres (110 miles) southwest of Palma.

"It's a place where you cannot sleep thinking you are going to wake up with no problems," added the worker, who asked not to be named.

Two weeks ago, a resident who had returned to his home after fleeing the attack was found beheaded, local police said.

"It is clear the situation is volatile" in Palma, said a Pemba-based aid worker, adding that "the reason people are still fleeing is because things are not okay, people are still trying to evacuate."

The number of people leaving is increasing by the day, according to an aid worker. By Alfredo Zuniga (AFP/File)

The number of IDPs "continues to increase by the day," said Mozambique chief of mission for the International Organization for Migration (IOM) Laura Tomm-Bonde.

Further inland a transit camp in Nangade is still receiving dozens of displaced each day.

The charity is registering between 80 and 100 displaced people per day who speak of "quite a lot of people still coming", he added.

Security has been beefed up. By - (AFP/File)

"With only a few evacuation routes remaining open, we are worried for those who are unable to leave the area," the UN's refugee agency UNHCR said in a statement last week.

At least 454 unaccompanied children have been found among the escapees, said Chance Briggs, country director of Save the Children charity.

Prior to the March attack, there were already close to 700,000 people uprooted from their homes in the vast and poor Cabo Delgado province.

There are fears that the end of Ramadan in mid-May could see a resurgence in attacks, analysts say.