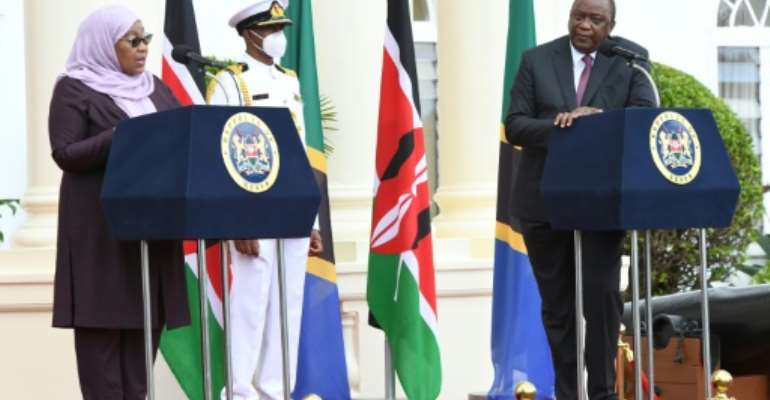 'Your visit has given us the opportunity to renew our relations,' Kenyatta told Hassan. By Simon MAINA (AFP)

Tanzania's President Samia Suluhu Hassan arrived in Kenya on Tuesday for a two-day trip to thaw relations between the neighbours, after years of disputes over trade and border issues.

Hassan is hoping to renew the all-important alliance with Nairobi, which came under strain during the tenure of her predecessor John Magufuli, who died suddenly in March.

Once close allies in the regional East African Community (EAC), Tanzania's participation in the bloc faded under Magufuli because of economic rivalry and accusations of unfair trade practices.

Hassan, 61, landed in the capital, Nairobi and was received by two ministers before heading to the presidency, where she inspected a guard of honour and received a 21-gun salute.

She then held talks with President Uhuru Kenyatta.

"Your visit has given us the opportunity to renew our relations," Kenyatta said at a joint press briefing with Hassan.

Kenya would work with Tanzania to ensure the nations' unity "will continue to grow and be strengthened for the benefit of our people", he added.

The two leaders announced the signing of a deal for the transportation of liquefied petroleum gas from the port city of Mombasa to Dar es Salaam, Tanzania's economic capital.

Such deals were irregular under Magufuli, who was seen as favouring other regional trading blocs.

Nairobi is the main investor in Tanzania from the six-nation EAC bloc, and the fifth-largest from the continent.

Magufuli, nicknamed the "Bulldozer" for his uncompromising leadership style, in 2016 declined to be part of Kenya's diesel-powered Standard Gauge Railway project, choosing instead to unveil a plan to build an electric railway.

That same year he declined to invest in a Nairobi-driven road project to link Kenya with Ethiopia, Uganda and South Sudan.

A series of rows followed in 2017 and 2018 when Tanzania burned alive more than 11,000 chicks imported from Kenya, and seized hundreds of cattle that had wandered across the porous frontier.

"We have agreed that our health ministers chart a plan to ease border crossing and checks to hasten service delivery," said Hassan.

The visit, almost five years since Magufuli came to Kenya, comes as Hassan moves away from the policies of her autocratic predecessor.

On Monday she announced a series of Covid-related restrictions on travellers arriving in Tanzania. Magufuli long denied the presence of the disease in the country, saying prayer had spared the nation from the disease.

This is Hassan's second foreign visit since she took power.

She will attend a state dinner on Tuesday evening, and will address a joint-sitting of Parliament on Wednesday.