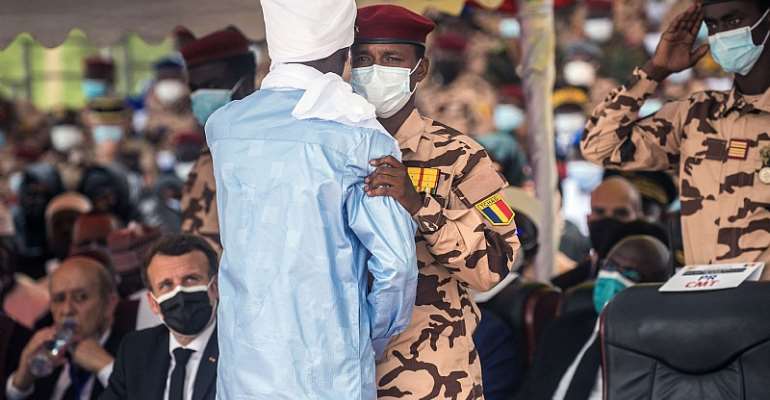 The recent spate of military coups in Africa, which were intended to be transitional, might instead be a risk for democracy in the long term. There might be a short term need to maintain security. But the military may not necessarily be a credible partner to build democratic governance. Military intervention could mean that people might continue to be in a state of stagnant democracy.

Chad is the most recent example of this. Soon after the death of President Idriss Deby , the military swiftly took over power. They immediately installed his 37-year-old son Mahamat , a military commander, as interim president. He will now lead an 18-month Transitional Military Council. Parliament and the government have been dissolved and the constitution suspended.

The military has stated that the dissolution of Parliament and suspension of the constitution are provisional. It claims that these measures are intended to maintain stability. And to ensure a peaceful and democratic transition of power. These arguments are not particularly convincing.

First, the military government has already created an atmosphere of fear . It has banned demonstrations and dispersed protesters using disproportionate and repressive force. Second, it has refused calls for a ceasefire and dialogue with the Front for Change and Concord in Chad, the rebel group alleged to be responsible for Derby's death. This goes against the tenets of a peaceful transition to civilian government, which should rightly consider an inclusive dialogue with all stakeholders.

Third, the military junta has appointed a civilian prime minister , Albert Padacke. The new prime minister was the runner up during the April 11 presidential elections . He is seen as a Deby ally and is, therefore, not a credible civilian stakeholder.

But Chad isn't the first African country to go down this path. Recent examples of military coups include Mali in August 2020, Sudan in April 2019, Zimbabwe in 2017, and Egypt in February 2011 and July 2013. In these cases, transitional military councils were established to oversee smooth and peaceful democratic transitions.

They took over under the guise of restoring democratic governance by maintaining order and temporarily overseeing political transitions. But early signs are not particularly promising.

Military coups and democracy in Africa

In Mali , after pressure from regional bodies like the Economic Community of West African States, the transitional military council was dissolved and a civilian-led transitional government was put in place.

Sudan also presents a particularly tenuous case. Since the ouster of former president Omar al-Bashir , some progress has been made to appoint a more inclusive cabinet. But the country's transitional agreement also secures the military's dominant role in political and economic life for the foreseeable future.

Even with these examples, the risks of Africa returning to the widespread military rule of the late 60s to early 80s is low. Nevertheless, there is a potential risk of sliding into a culture of military 'siege' on democratic governance.

Eventually, they may become more and more autonomous and less accountable to oversight from government. And may begin to make demands on the government, such as demands for increased wages, better housing, expensive military equipment. They could also demand that governments divert resources to the military to consolidate its power. Because these governments depend on the military for their legitimacy, they would be hard-pressed to resist these demands.

Eventually, governments that are propped up by the military can easily become authoritarian. With the support of the armed forces, they can crack down on political opposition or any form of anti-government protest. This undermines democracy because political freedoms are suppressed. The political space becomes increasingly restricted, which can lead to a replication of the same conditions which precipitated the military take-over.

Military interventions may be deemed necessary in the short term to maintain peace and security. But, they are inherently unconstitutional. No doubt, Chad is still in its initial stages of a military led transition, but it may yet become another example of how democratic progress can be subverted by the military. What eventually happens will be significant not only for the Chadian democracy, but for what can become an uncomfortable path to democratic governance in Africa.

The task of democratic development and entrenchment in Africa is enormous. There are no quick fixes. The current wave of military interventions or 'covert coups' can be viewed as a movement to protect and support democracy in Africa. But it remains to be seen whether the military is a credible partner to achieve this objective.

Laura-Stella Enonchong does not work for, consult, own shares in or receive funding from any company or organisation that would benefit from this article, and has disclosed no relevant affiliations beyond their academic appointment.