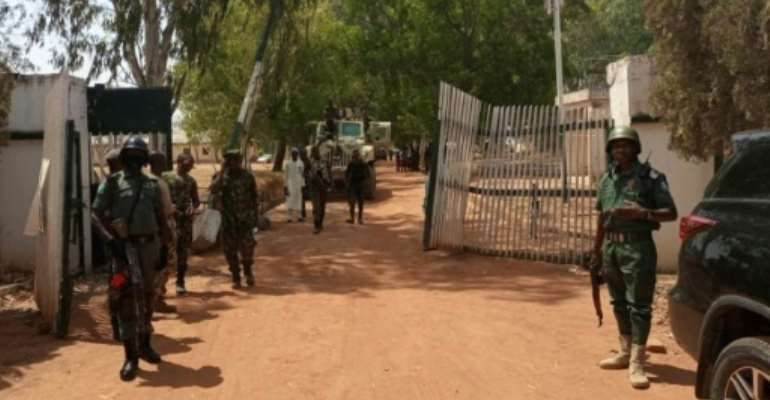 Nigerian soldiers are struggling to cope with a surge in attacks, kidnappings and violence across the country. By Bosan Yakusak (AFP)

Nigeria's armed forces have dismissed suggestions that they should take over from President Muhammadu Buhari, who is facing mounting pressure over the country's worsening insecurity.

It was not the first time Nigeria's armed forces have issued a statement backing Buhari, but the latest has come after weeks of criticism of the 78-year-old former general's failures to stem the protracted security crisis.

From a jihadist insurgency in the northeast to herder-farmer clashes in the centre, banditry in the northwest and separatist tensions in the southeast, Buhari's armed forces appear to be struggling to curb insecurity.

In a statement late Monday, the armed forces said they would continue to "fully" support the government, remain politically neutral and protect Nigeria's democracy.

"Let it be stated categorically that the Armed Forces of Nigeria remain fully committed to the present administration and all associated democratic institutions," army spokesman Onyema Nwachukwu said in a statement.

"We shall continue to remain apolitical, subordinate to the civil authority, firmly loyal to the President, Commander-in-Chief of the Armed Forces of the Federal Republic of Nigeria, President Muhammadu Buhari and the 1999 Constitution as amended," it said.

Last week, lawmakers had urged Buhari to declare a nationwide state of emergency after a month of almost daily attacks, kidnappings and killings across Africa's most populous country.

The mililtary statement referred specifically to comments made by Robert Clarke, a prominent lawyer and social commentator.

He had said the country was on the brink of collapse and suggested the political leadership hand power to the military so that the security forces could be restructured.

Buhari met with his top security chiefs last week and again on Tuesday to discuss the country's violence.

"We shall continue to discharge our constitutional responsibilities professionally, especially in protecting the country's democracy, defence of the territorial integrity of the country as well as protection of lives and properties of citizens," the military statement said.

The army expressed the hope that the nation's "current security challenges are not insurmountable."

Nigeria returned to democracy in 1999 after almost 16 years of military rule.

Buhari, a former army commander and military ruler in the 1980s, was first elected in 2015 and re-elected four years later on a pledge to end the Boko Haram insurgency in the northeast.

Since 2009 when it began, the jihadist uprising has killed 36,000 people and forced over two million others to flee their homes in Nigeria's northeast alone.

The violence has also spread to neighbouring Chad, Niger and Cameroon, prompting a regional military coalition to fight the insurgents.

I dozed off only to realize JB Danquah Adu has been killed –...
53 minutes ago