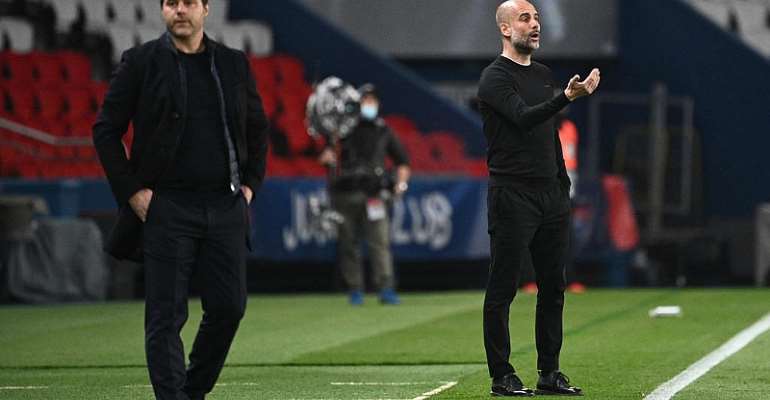 Paris Saint-Germain coach Mauricio Pochettino on Monday urged his players to believe they can come from behind and beat Manchester City to advance to the Champions League final for the second year on the trot.

Pochettino's men go into the second leg on Tuesday night at the Etihad Stadium trailing 2-1 from last Wednesday's game at the Parc des Princes.

"It's brilliant to be in the semi-finals," said Pochettino. "It is exactly where you want to be and what we want. We have beaten Barcelona and Bayern Munich to be here and we have to believe that we can beat Manchester City."

But City boss Pep Guardiola sent out an re-energised team for the second period. They  upped their performance collectively and were rewarded with goals from Kevin De Bruyne and Riyad Mahrez.

PSG's star strikers Neymar and Kylian Mbappé faded during the latter stages of the game as the hosts lost their discipline as well as midfielder Idrissa Gueye who was expelled for a crude hack on Ilkay Gundogan.

Ban
The Senegal international will miss Tuesday's game and the final - if PSG progress - after Uefa's disciplinary doubled the usual one match punishment for what they described as "serious rough play".

Despite the setback, he has travelled with the squad to northern England. Mbappé has also made the trip despite the calf injury that kept him out of Saturday's 2-1 win over Lens in Ligue 1.

"Kylian will be assessed on Tuesday and we will decide whether he can play," added Pochettino.

The France international's absence would be a significant blow for PSG who need to win by two clear goals or by one goal from 3-2 onwards.

"City have the advantage," said Pochettino. "And we have to take risks and be aggressive looking for the goals against a team that is very intelligent. It will be a fight and we have to be ready."

Pedigree
Pochettino led his Tottenham Hotspur side past City on their way to the 2019 Champions League final where they lost to Liverpool.

Guardiola has not steered a side to the Champions League final since the second of his trips with Barcelona in 2011.

On the eve of the game, the Spaniard said his City players had to control their emotions and take the chance to make history for the club.

"We don't want to miss this opportunity," he said. "It's the first time most of us are here together. I know what we're playing for. In these games you don't need many emotions - be calm and know what you have to do.

"They have to visualise they can do it. What we have to do is no different to what we've done during the last seven months: go out there, play our game and win."

Whoever emerges from the showdown will take on Real Madrid or Chelsea who play the second leg of their semi-final on Wednesday night at Stamford Bridge in west London.

I dozed off only to realize JB Danquah Adu has been killed –...
51 minutes ago