Are we close to the Tipping Point? 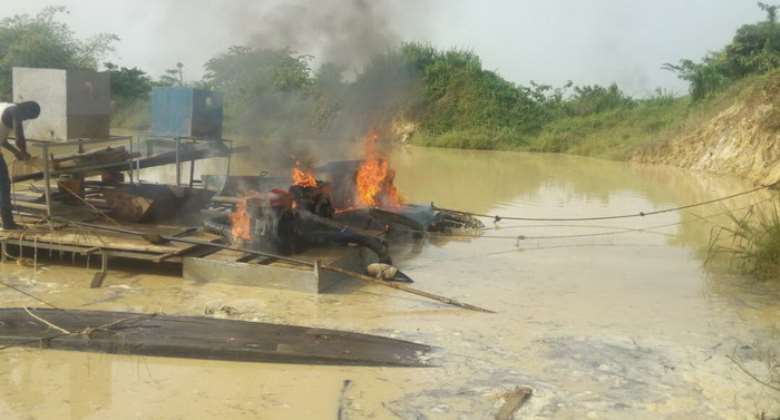 The destruction of our environment and poisoning of our waters, a direct consequence of illegal mining, is high on the agenda once again. Our lands are polluted, and our rivers are dark brown, probably poisoned with mercury and other contaminants.

The Government has directed that all illegal and legal prospecting activities in forest reserves should be suspended until further notice. Better late than never, but why has the environmental vandalism been allowed to go on for so long?

In 2017 the President assured Ghanaians that he would put his Presidency on the line to stop galamsey, but sadly the menace continued. It is worrying that former President John Dramani Mahama is reported to have said at a durbar in Odum-Banso in October 2020 that he would grant amnesty to galamsey operators if elected. He added that his administration would assign professionals from the University of Mines and Technology at Tarkwa (UMaT) to mining districts to regulate and train all small-scale miners to ensure their safety during the mining process, and also train them in land reclamation.

The fight against illegal mining must be non-political, it is about the survival of Ghana.

Well done to all the activists who have been campaigning for sanity regarding the issuing of licences for mining activities in forest reserves. The question is why has it taken this long to take robust action? Ghana has been hosting conferences, discussions, and conversations on the environment whilst our house is literally burning.

There have been articles and exposés on the destruction of our forests and pollution of our water bodies for ages. On January 28th2021, a number of media houses published a story and a letter signed by Eco-Conscious Citizens and other civil society organisations, environmentalists and concerned citizens, responding to a story by Joy FM on the destruction of Apamprama and Manso Forest, and army officers allegedly protecting illegal miners. We are waiting for the outcome of the investigations by the Military High Command on the matter. The unanswered questions remain. Are private armies operating in Ghana contrary to the constitution or is moonlighting taking place?

One wonders why it is taking so long for a sustained approach on combating illegal mining, and we hope the suspension of licences will not be a one day wonder. The situation is dire. Our waters need to be tested for poisonous substances and cleaned up.

Our attention was drawn to the case of a gentleman whose cocoa farm at Akem Abekoase was allegedly destroyed by Habilass Resources company which is reported to have majority Chinese shareholders. Whilst illegal miners are devastating our environment and cocoa farms are being destroyed by Ghanaians and foreign nationals including Chinese with the complicity of Ghanaians, the Chinese Academy of Tropical Agricultural Sciences says that the Chinese island of Hainan has exported cocoa beans to Belgium. The European Union has warned us that it may stop importing cocoa from Ghana because of land degradation. This should be a wake up call. It is easy to blame the Chinese, but the reality is that China will not tolerate such activities in its country. It is for Ghana to enforce its laws and deal with all who break our laws with impunity.

It is interesting to note that in 2018, during his speech at the "Rebranding Africa Forum", in Ouagadougou,H.E Nana Addo Dankwa Akuffo-Addo said "In our quest to develop, our beautiful lands and rivers are under threat. We are degrading our environment at an alarming rate. Once beautiful and thick forests have been denuded of their cover. Once majestic and awe-inspiring water bodies have been polluted and many of the animals no longer have safe habitats."

We must permanently suspend all plans to mine bauxite at Atewa Forest Reserve. Mining bauxite will not only destroy the ecosystem and endangered species but will also poison the source of water to over five million people. The Ayensu, Birim and Densu rivers take their source from Atewa Forest Reserve. At a time when Ghana Water Company Ltd is warning that if urgent steps are not taken it might not be able to purify our water, we cannot risk mining bauxite at Atewa Forest Reserve and poisoning our water bodies. We must heed the President's warning about “degrading our environment at an alarming rate.”

Ghana's problem is lack of enforcement. We have all the laws in place to stop illegal mining and other environmentally damaging activities, but we don't enforce them. The perception is that this is partly because there are so called “big men” behind illegal mining who fund the two main political parties and are therefore untouchable. The problem has grown, and we are told that some of the illegal miners are heavily armed. This is a security concern.

Regarding enforcement of our laws, it is refreshing to note that the Greater Accra Regional Minister, Hon. Henry Quartey is trying to restore sanity, enforce laws and clean up Accra. His motto “Let's Make Accra Work Again” resonates with Ghanaians.

He has met with some opposition from members of his own Party who are more concerned about winning elections than the well-being of Ghana, but doing the right thing usually comes at a cost.

Eco-Conscious Citizens commend his efforts and will oppose any attempts to remove him or move him to another Ministry on account of his efforts to clean Accra and restore sanity.

We encourage Ghanaians to support him and also make our Metropolitan and Municipal Assemblies work. Let's be active citizens and ensure that our Municipal Assemblies enforce bye-laws, especially laws on noise, sanitation, and indiscriminate building. “Let's Make Ghana Work Again”