On the attack mode 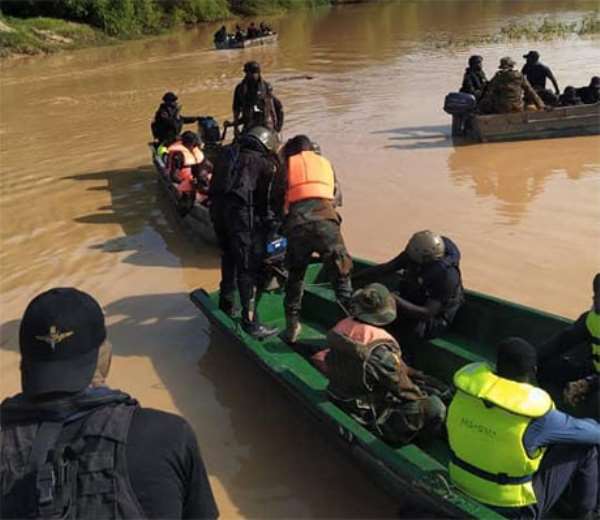 The Commander-In-Chief has issued his orders to the military asking them to remove all items used in illegal mining activities on water bodies and in the forests.

Such clear and unambiguous orders should leave nobody in doubt about the exigency of the issue at stake.

Indeed, the fight against illegal mining activities has been subtly put on a war-footing, though without conventional war tactics.

It is mainly an attack mode warfare with a difference in which there should be no retreat or surrender whatsoever.

Two hundred soldiers have been deployed to enforce the directives.

The destruction of illegal mining paraphernalia which commenced a couple of days ago should be the feature of the warfare being waged against the miscreants.

The grace period is long gone and those calling the bluff of the law should be dealt with accordingly.

Those who might as usual drag the subject to the arena of partisan politics, we are sure would shun the pastime this time because the 'eyes of the President are red.'

Our water bodies and forests are under an unusual threat, and as citizens of this country, we are either with the state's resolution to protect these natural endowments or on the side of miscreants who are resolved in continuing on the unacceptable trajectory.

The Chinese envoy's explanation that his compatriots depend on local people to undertake the illegality is instructive and interesting.

Of course foreigners cannot descend on the illegal mining sites without the connivance of local persons who know the terrain.

The Ghana Immigration Service personnel should be involved in the war against the illegal mining activities, considering the involvement of non-Ghanaians who supply the destructive gadgets for the furtherance of the trade. The foreigners are easily identifiable in the illegal mining sites whose adjoining settlements are where they live to undertake their occupations.

Previous interventions having failed to yield the desired results of stopping the degradation of our water bodies and forests, the current one must succeed come what may.

A total eradication of illegal mining and for that matter protecting our water bodies and forests against the destructive elements is an expensive engagement, but the money that would go into the policing assignment is worth it.

The aerial view of the already degraded forests inflicts the kind of pain which questions whether those behind the destruction are real sons and daughters of this country. Patches of bare lands in the middle of rainforests and turbid waters speak of wicked rape of the areas by persons who could not care about tomorrow.

A reconstructed picture of how our water bodies and forests would look like in the next ten years when nothing is done to stop the unacceptable exploitation would explain better the dire situation in which we have been pushed into.

Not taking the kind of action we are witnessing now would be an act of wanton irresponsibility on the part of both the state and the citizenry.

Continuous monitoring of progress being made should be encouraged and soldiers deployed should not stay for too long at the theatres of operation lest they become familiar with the actors thereby compromising the quality of their duties.