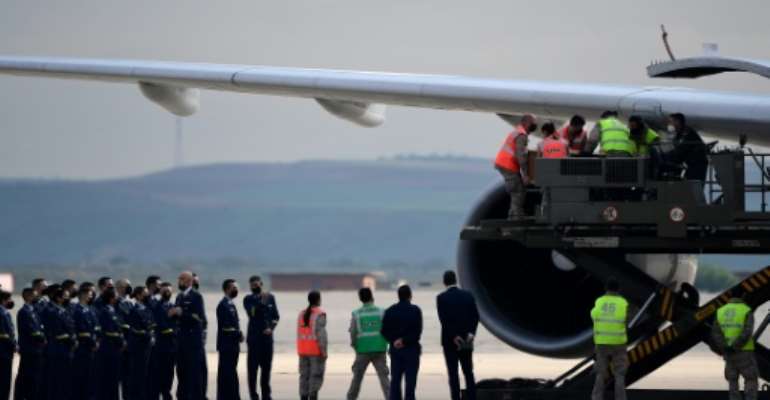 An Airbus 310 jet belonging to the Spanish air force took off with the bodies of the journalists and conservation campaigner. By JAVIER SORIANO (AFP)

The bodies of two Spanish journalists and an Irish wildlife activist killed during an anti-poaching patrol in Burkina Faso were repatriated early Friday aboard a military plane.

Journalists David Beriain and Roberto Fraile were accompanying Rory Young, head of the Chengeta Wildlife group, in the Arly National Park on Monday when they were attacked.

Security sources said the assailants had approached the group, which also included soldiers and forest rangers, in pickup trucks and on motorbikes.

The three Europeans were initially reported missing and the subjects of a major search, but the Burkina authorities said Tuesday they had been "executed by terrorists".

Their bodies were taken by helicopter to Burkina Faso's capital Ouagadougou on Tuesday.

An Airbus 310 jet belonging to the Spanish air force touched down shortly after midnight Friday in the capital Ouagadougou then took off again two hours later with the three bodies on board, according to AFP journalists.

They arrived at the airport in large wooden coffins each bearing the name of the victims, and were taken directly on to the tarmac before being placed in the plane under the supervision of Spain's counsul to Burkina Faso.

Once largely confined to Burkina's north, killings blamed on jihadist groups like the Al-Qaeda-linked Group to Support Islam and Muslims (GSIM) and the Islamic State in the Greater Sahara (ISGS) have more recently targeted other parts of the country.

More than 1,300 people have been killed and one million have fled the violence since 2015.