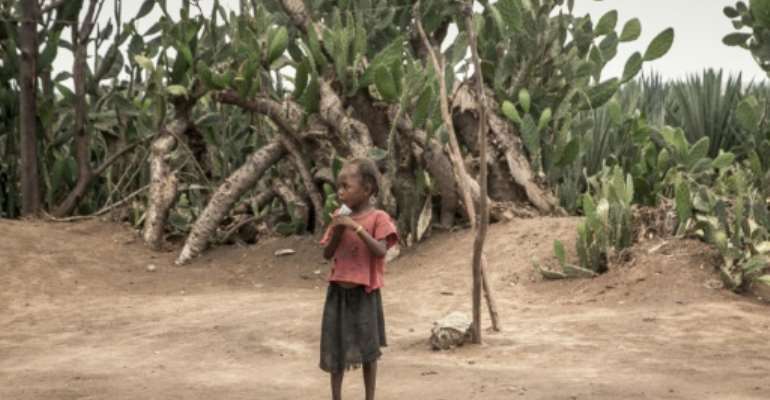 Many children have been suffering from malnutrition through year after year of drought in southern Madagascar. By RIJASOLO (AFP/File)

Persistent drought in southern Madagascar has left hundreds of thousands of people on the brink of famine and stoked acute malnutrition among children, the United Nations World Food Programme (WFP) warned Thursday.

Ministry of Health data revealed that 16.5 percent of children under five now suffer from acute malnutrition, almost double the proportion four months ago, the agency said.

The Ambovombe district in the Indian Ocean island's far south has been the worst-hit.

Acute malnutrition there exceeds 27 percent, "putting the lives of many children at risk," WFP said in a press statement.

"The scale of the catastrophe is beyond belief," said WFP Senior Director of Operations Amer Daoudi, on a mission in the area.

"We have witnessed heart-breaking scenes of severely malnourished children and starving families," Daoudi said in a statement, calling for "money and resources now to help the people of Madagascar".

Some 1.35 million people have been left in need of emergency food and nutrition assistance by the ongoing drought which intensified from the start of the lean season in September.

Through monthly food and cash distributions, WFP says it has assisted 750,000 people, but hundreds of thousands more are being pushed "to the brink of famine".

Making a call for urgent action to address the unfolding humanitarian crisis, WFP estimates that US$74 million is needed over the next six months to "prevent a catastrophe".

It said harvest prospects for this year were poor, with food production expected to be less than 40 percent of the average in the past five years, "making it harder for communities on the brink of survival to feed themselves."

The semi-arid conditions of southern Madagascar, combined with high levels of soil erosion, deforestation and unprecedented sandstorms, have turned arable land into wasteland across the region.