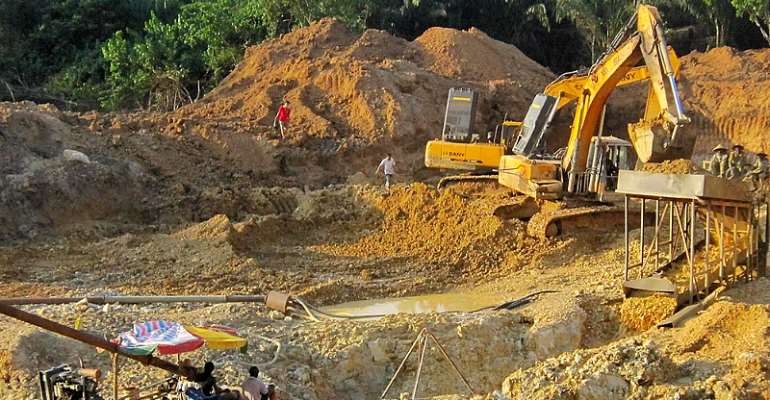 The Greater Accra Regional Organizer for the opposition National Democratic Congress (NDC), Anthony Kwame Nukpenu has asked President Akufo-Addo to consider a ban on the importation of mining equipment into the country.

Speaking on Ghana Kasa on Agoo T.V/Kasapa 102.5 FM Thursday, the Regional Organizer suggested that the measure is the way to go in tackling the menace head-on.

“If the government should take such steps, I believe that we’ll go a long way in the fight against galamsey, because largely those destroying our water bodies are foreign nationals. The Ghanaians engaged in gather and sell have been doing this for a very long time but never destroy our water bodies,” he stated.

He continued: “Most of the machines being used in the galamsey operations are all imported into the country. I want to hear the President issuing a ban on the importation of these machines, so importers will not clear such machines at our ports,” he suggested.

Mr Nukpenu said the deployment of the 200 soldiers to forests and on the river bodies to fight galamsey is a knee-jerk approach by government.

“The machines that these soldiers will be retrieved from their operation, there should be clarity on the seizure and confiscation of these machinery. We must not hear that one has gotten missing,” he stated.

Mr Nukpenu said the government must adopt a holistic approach in the fight against galamsey rather than the several dialogue sessions being organized on the menace.

“You said soldiers should go and protect Pra and Ankobra River whiles the small rivers are left. Meanwhile, the pollution on the big rivers is a result of the activities from these small rivers. So if you go and stand on River Pra you are not going to get any result. The mining activities are being carried on these small rivers which are tributaries to the bigger rivers,” he reiterated.

Tolon: NDC slams Bawumia for allowing hospital to rot after ...
52 minutes ago