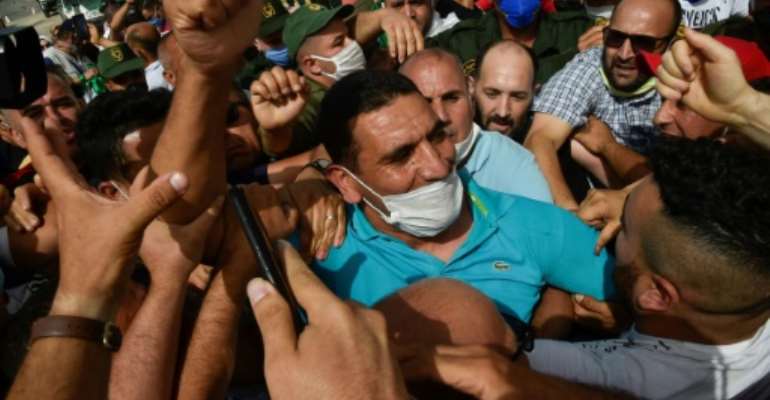 Karim Tabbou, a prominent figure in demonstrations against longtime president Abdelaziz Bouteflika's bid for a fifth term in office, was sentenced to a one-year suspended sentence in 2020. By RYAD KRAMDI (AFP)

A leading Algerian opposition activist was detained late Wednesday night, according to his lawyer.

The 47-year-old will appear before a prosecutor on Thursday, lawyer Me Ali Fellah Benali said on social media.

Tabbou was summoned to the police station on Wednesday to respond to a complaint filed against him by Bouzid Lazhari, the president of the National Council for Human Rights (CNDH), an official body.

The protester became one of the most recognisable leaders at mass demonstrations that broke out in February 2019.

The rallies, led by the Hirak movement, continued well beyond Bouteflika's resignation in April of that year, and were only suspended when the coronavirus pandemic struck.

Since the group's second anniversary in February, thousands have returned to the streets, defying a coronavirus ban on gatherings.

But Tabbou's detention comes as activists warn of an increasing climate of repression, with political opponents and journalists targeted in the run-up to legislative elections in June.

Earlier this month, security forces arrested eight people they said were linked to the Hirak movement over an allegedly foreign-financed criminal association.

He has called early elections for June 12 in an attempt to respond to Algeria's political and socio-economic crisis, but Hirak supporters have denounced the vote as a "masquerade".

Authorities say the movement is being infiltrated by Islamist activists who are trying to drag it towards violence.