Threat To Media Freedom Or Myth? 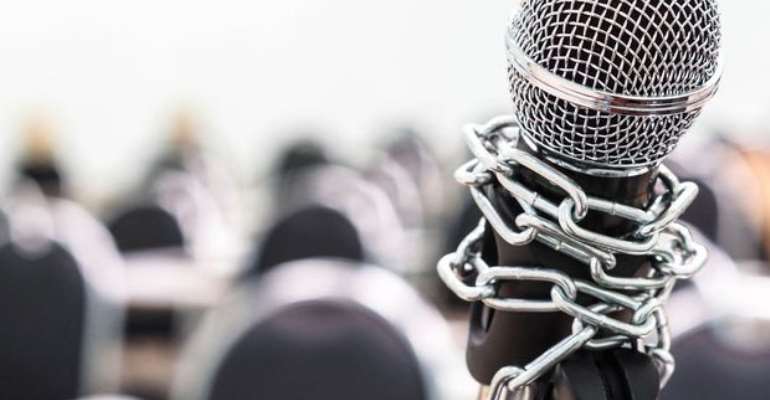 Our ears have for some time now been inundated with shouts from certain quarters about threat to freedom of expression creeping into the society. The shouts became louder after the murder of Ahmad Suale and the supposed threat on the life of Manasseh Azure Awuni.

Indeed, Manasseh and his former employers, Multimedia Group, have been the loudest. No day passes without one hearing them screaming their voices hoarse on the so-called threat to freedom.

We all know what made Manasseh decide to give the Nana Dee government a bad name in order to hang it, don’t we? The fierce reaction to his ill-conceived and badly produced “Militias in the heart of the city” certainly played a central role.

I do sympathize with Manasseh on the threats on his life. But he should not pretend that death threats started with him. Many, including yours truly, have had their share.

I have been a columnist of the ubiquitous Daily Guide for close to a decade plus five years. I have praised, criticized and lampooned many in the line of duty. Some have expressed joy and excitement after being praised, while others have expressed unadulterated anger for being lampooned by a small fish like me.

I remember vividly an incident that happened 14 years ago, as if it was yesterday. It was during President Kufuor’s era. A ‘big man’ called my boss to show his ‘krakye’ powers by asking why he had allowed a non-entity like me to question his actions.

My crime? Hmm, my only crime was having the temerity to question why the ‘big man’ had driven from the presidency to the Kotoka International Airport to protect an errant niece, whom had received a retaliatory slap from an Aviation Security personnel.

Yes, I’ve had my share of warnings, insults and even threats on my life. I clearly remember, during Agya Atta’s reign, how I received a strange call one Wednesday afternoon from a supposed ‘Angel of Death’, who told me to prepare to meet my ancestors in Samanfoland by the end of the week. I did not take the threat lightly because getting my number was the first puzzle that made me realize how serious the caller was. The precautions I took and how I managed to survive those turbulent waters are new discussions for another day.

So, you see, I will be the last person to support insults and threats on the life of people for expressing their views and opinions on pressing national issues. I will support the right to free expression even if it is to criticize my own actions. In the same vein, I expect those criticizing others to know that they are also not beyond criticism.

Just as freedom of the press is important and must be protected, so are the freedoms of everybody else and the right to a rebuttal. Too bad if some journalists think they are ‘untouchables’; so their words must be swallowed hook, line and sinker.

“If journalism is a force of immense influence – and I think it is, and should be – then it surely deserves scrutiny.” These are the words of Alan Rusbridger, former editor-in-chief of The Guardian in London. Obviously, it is the ‘scrutiny’ that Manasseh and his ilk are desperately trying to run away from.

With political stakes so high in Asomdwekrom, Manasseh cannot publish half-truths and pure lies in his ‘militia’ documentary and expect it to go without scrutiny. Of course, it was the scrutiny that exposed his lies and half-truths.

We’ve all seen how on many occasions Multimedia platforms have been caught propagating pure lies and half-truths against the Nana Dee government. When challenged by the ever vigilant youth of the Elephant, you hear them scream “threat to media freedom”, “Journalism is not a crime”. The most recent lie to be exposed was the publication that the country had been downgraded from the middle income class to a developing one.

Mark Twain once said, “A half-truth is the most cowardly of lies.” How profoundly true! How many times haven’t we seen cowards, parading as journalists, gleefully engaging in sensationalism and half-truths for parochial purposes?

What the likes of Manasseh have failed to realize is that the advent of social media has broaden the media landscape. When journalists criticize on their websites, on newspaper pages and in radio and television studios, other interested parties too critique and rebut on their Facebook walls and Twitter pages. So pure lies and half-truths will continue to be exposed.

For sure, the song on threat to media freedom is a myth that cannot be believed because the claim is standing on very wobbly legs.