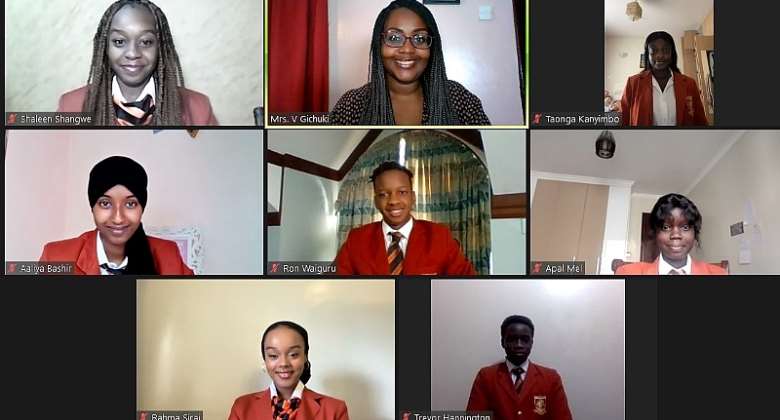 The debating skills of Africa’s future legal experts have been recognised as outstanding in a competition hosted by a leading UK university.

Pupils from schools in Ghana, Kenya, Nigeria, Uganda and Zimbabwe participated in the University of Dundee’s African Schools Mooting Competition 2021.

The competition saw 13 teams make a case against an opposing counsel and before two judges.

They were asked to make submissions in a fictitious civil law appeal before the United Kingdom Supreme Court, with the team from Brookhouse School, Nairobi, Kenya, declared winners after performances of the highest standard. The team from Tema International School (TIS) in Ghana were named runners up, with Chisipite Senior School in Zimbabwe finishing in third place.

Professor Peter McEleavy, Barrister, Professor of Law and Academic Lead for Sub-Saharan Africa at the University, said, “This is the fifth Mock Trial Competition Dundee Law School has run in Africa. Whilst the global pandemic meant that we were not able to conduct the competition face to face, the move online opened the door to making it a pan-African event. It was wonderful to bring schools and young people together from across the continent.

“The standard this year was the highest we have encountered. The senior high school pupils got to grips with complex legal concepts and produced compelling submissions. I have no doubt that many will go on to be legal stars of the future.”

Victoria Gichuki, Teacher of Law at Brookhouse Schools, said, “Brookhouse Law students were excited to participate in their very first mooting competition this year. It gave them a valuable opportunity to hone both their written and oral advocacy skills, which they enjoyed. In-class preparations for these were sometimes quite intense.

“They were elated and extremely proud of their achievement when they received the news of their win during the prize-giving ceremony. We applaud our students for a job well done and look forward to the next competition."

Eunice (Aryee) Fianu, Head of University Guidance and Counseling Department at TIS said, “Celebrating our students’ success stories is our greatest pride. We congratulate our team for their fabulous performance. The TIS community is overjoyed at the opportunities this prestigious University offers and we look forward to more effective collaborations.”

The University has a long and distinguished history of training lawyers who go on to practice in common law jurisdictions. Dundee is ranked in the Top 15 of Law Schools in all current major UK league tables.

Twelve students from across Africa joined the University in October 2020 to start their LLB degrees – several having participated in the University’s 2019 Mooting competitions in Kenya and Nigeria.