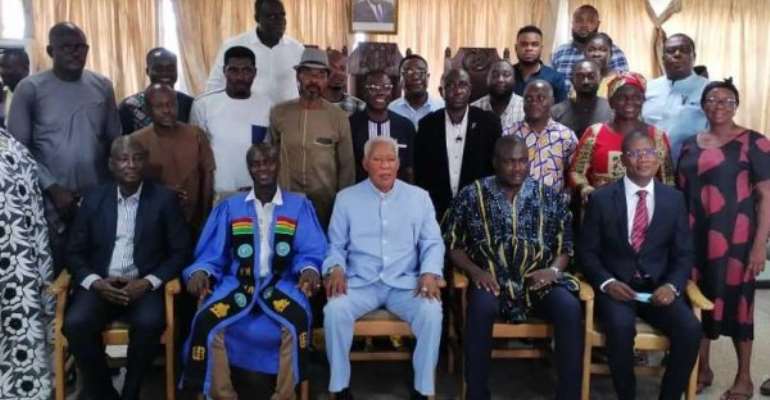 Enoch Teye Mensah, a leading Member of the National Democratic Congress (NDC), has rehashed the age-old wisdom that political differences need not be synonymous with enmity, using himself as an example.

At the Tema Metropolitan Assembly (TMA) meeting, Mr. ET Mensah revealed he was a longtime friend of President Akufo-Addo and that their friendship continued to date even though Akufo-Addo was an NPP member, while he was NDC.

According to him, the two of them were close when they were both in Parliament representing Ningo-Prampram, in his case and Akyem Abuakwa in Akufo-Addo's case.

He also revealed that he was an in-law to Mr Kojo Mpiani, a kingpin of the NPP who was Chief of Staff to former President John Agyekum Kufuor, explaining that he became Mpiani's in-law when his daughter got married to the son of the NPP kingpin in the United States of America.

The former NDC MP for Ningo Prampram and current Greater Accra regional representative on the Council of State made these revelations when he addressed the Tema Assembly Meeting.

He therefore urged the Assembly Members of the TMA to put aside political differences and work for the common good of Tema.

The meeting was also attended by the MP for Tema East, Mr Isaac Ashai Odamtten.

With his rich experience in governance, Mr ET Mensah was asked a number of questions by Assembly Members, including a request to provide insights on a constant turf war that the TMA was having with the Tema Development Corporation and the Ghana Ports and Harbours Authority (GPHA).

In response, Hon. E.T. Mensah said so far as the Tema Metropolis was concerned, the TMA has both the Executive and Administrative authority to govern as the Metropolitan front of the Ministry of Local Government.

He said the TDC was only a developmental organ of State in Tema and in terms of the administration of building permits and the collection of tolls, he said those firmly fell in the jurisdiction of the TMA and urged the Assembly to be firm in dealing with issues in its jurisdiction including; enforcing laws that prohibit the building of structures on water ways and pipelines.

Mr. ET Mensah, who himself is a resident of Tema and a former minister of Works and Housing, touched on some of his achievements as Works and Housing minister as well as achievements in the Youth and Sports Ministry said the Metropolis' water supply was suffering negative impact because the Kpong water treatment plant which was set-up by Ghana's first President, Kwame Nkrumah and later revamped by former President Mills, now lacked the capacity to satisfy the increased population of Tema.