Domelevo, Welcome To The Sexagenarian Club 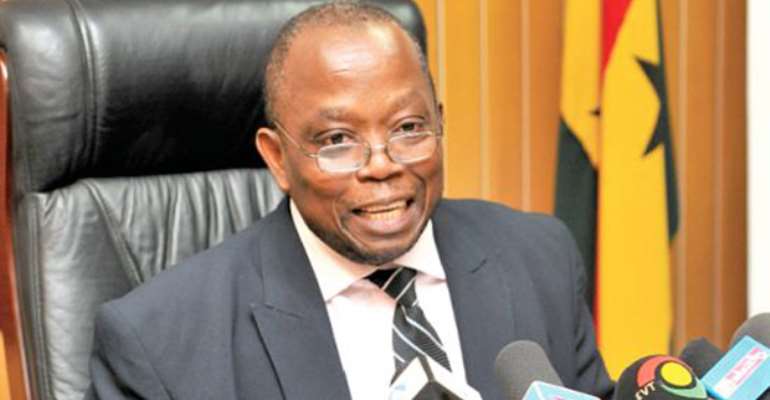 “Often when you think you are at the end of something, you're at the beginning of something else.” Fred Rogers.

THIS IS TO WELCOME Mr. YAO DOMELEVO the erstwhile Auditor – General to our unique club. Do not be deceived by the recent sex-related out pouring of the social media to think that our club has anything to do with “sex”.

We cannot be like the happy-go-lucky Akuapem Poloo to display our genitalia to our sons and daughters. Mind you, most of us are Presby (Presbyterian) trained… So, mepa wo kyew se…A Sexagenarian is someone aged between 60 and 69, and our club welcomes such persons, usually retirees from government service (and a few from private organizations”.

Is somebody itching to ask for the name of someone aged more than a 110? Demographers must have a cut-off: but “supercentarian” will answer all 110 years or beyond.

But before admitting Domelevo, we pause to ask: Who filled the civil service recruitment form for him on October 1, 1978 when he joined the Social Security and National Insurance Trust? So who wrote: Date of Birth? 1st June, 1960? Of course, 1st June, 1960 was a Wednesday and he would have been called “Koku” not “Koku Anyidoho.

Then, again, who wrote “Agbetofe: in Togo as his place of birth? Section 59 of the Civil Service Act states: “The regulations shall prescribe the method of recruitment of non-Ghanaians resident outside the Republic and the terms and conditions to that recruitment” Perhaps he was interested in the “terms and conditions”; would he not be better salaried than his counterpart from Ada?

Domelevo, having been born in the 1960s fell into the decade called “Baby Boom”. The “Bommers” as they were called, grew into adulthood enjoying “hippie culture.” It was a time of “Psychedelic” language and dressing (with the trouser-bass of up to 30 inches); it was “free” movement, “free love” and as Bob Stubs notes in “Unicorn Philosophy”; it was a revolution of individuality… It was essentially a striving for realization of one's relationship to life and other people.”

Rock music, typical of the Beatles and Rolling Stones was all over the place. It was a period of student protests and constant political agitations. We had the Vietnam War (involving the U.S. backed South Vietnam and the Soviet backed North Vietnam as well as Civil Rights Protests. It was in one of the civil Rights rallies that Martin Luther King Jnr. got assassinated. It was also that same decade that the U.S. President John Fitzgerald Kennedy was shot dead.

With the sad history of the Ghana's Aliens Compliance Order (1969) and Nigeria's expulsion of “aliens” from Nigeria (1983), no true “ ECOWAS” Citizen would want to enter into any unnecessary debate about anybody else's “nationality”. But what was the motivation in Domelevo's own declaration of Togolese on filling the form whilst applying for a job in Ghana? Who does not know the “artificiality” of our borders between Ghana, La Cote d'Ivoire. Togo and Burkina Faso? Border-lines that split families, chiefdoms, farmlands and

even houses! Border lines reinforced by the Anglophonic and Francophonic expressions and attitudes.

Domelevo must look back and relish the experience he has had. With his zodiac sigh being Gemini, he had the tendency to explore almost everything and had the ability to learn quickly.

But he must remember that his weaknesses remain nervousness, indecision and inconsistency. With his birth stone being pearl (the joyful tears of the goddess of love, Aphrodite) and the rose is his flower.

There have, of course, been a tussle and a war of words between Domelevo and the presidency; the former accusing the government of acting in bad faith in directing him to go on an “accumulated leave” and the latter defending its actions as being based on law; the

Labour Act, the Audit Service Act, and the Auditor General's conditions of service.

Some people smelt a rat when Domelevo was appointed on December, 30, 2016 by the Mahama administration (when the 2016 election showed Nana Addo had won the presidential election and had only a week to be sworn in). And his work fell in tandem with

We have followed the argument of several Civil Society Organizations, including the CDD hitting the government hard for breaching Article 23 of the 1992 constitution. But in a “measure-for-measure” style, the government, through the Secretary to the President, Nana Bediatuo Asante stressed that the Domelevo “appointment was questionable, to begin with” and that he was put there by Mahama to “pursue a particular agenda.”

But what was it that made Mahama change Dr. Felix Kwame Aveh for Domelevo? Perhaps “the change was a result of some unforeseen circumstances”; as Julius Debrah wrote to the Council of State.

Domelevo himself has praised Nana Addo for having urged him to “go and take the job” That shows his sincerity. Now, with the supposed new 'appointment' as European Union. External Auditor, his plate will continue to be full.

Involve chiefs in galamsey fight – Otumfuo to govt
29 minutes ago