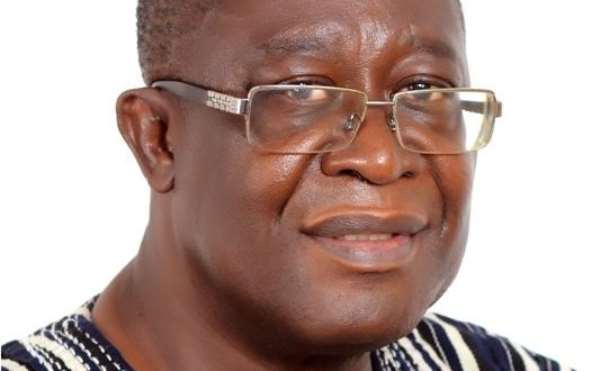 A former Eastern Regional Minister in the erstwhile National Democratic Congress (NDC) government, Antwi Boasiako Sekyere says it is erroneous for anyone to claim that a recent meeting of members of the party with him among the lead organizers was ostensibly aimed at pushing Goosie Tanoh as the preferred flagbearer for the party in 2024 general elections.

Speaking on Eyewitness News, he said the organizers did not consider such a discussion, neither did they raise such an issue throughout the meeting.

He said the meeting, which was held in Tema over the weekend, was primarily to discuss the challenges facing the party at the grassroots level and to find ways of tackling them in order to improve the party’s fortunes ahead of subsequent elections.

“That is the person’s opinion, but we don’t have anything like that. It never came up at all… Why are we interested in who will be the flagbearer when all the data shows that we are weak on the ground? Why would we ignore all that and be talking about who will be the flagbearer? We didn’t talk about that,” he told the host of Eyewitness News, Umaru Sanda Amadu on Monday, April 19, 2021.

The group, known as the NDC Democratic Platform Initiative, made up of some party bigwigs including Dr Benjamin Kumbuor, Dan Abodakpi and Ebi Bright held their meeting last Saturday to discuss the party’s challenges and pathway towards reorganisation ahead of the 2024 polls.

Following the event which had no NDC national executive or the party’s flagbearer in the previous polls, John Mahama in attendance, many were of the view that it was part of an agenda to promote another leading member of the NDC, Goosie Tanoh as the preferred choice for flagbearer ahead of the 2024 elections.

Goosie Tanoh, a failed election 2020 flagbearer candidate was present at the event and was part of the main speakers.

But according to Antwi Boasiako, the absence of an NDC national executive was not their doing as they duly sent an invitation to the party leadership through the chairman, Samuel Ofosu Ampofo.

He further added that the presence of Dr. Kumbuor and Mr. Goosie Tanoh was not out of place as they are not “strangers” to the party.

“They have been cadres from day 1 of the revolution through the formation of the NDC to this time, so it is not that they are strangers [to the party]… We wrote to the National Chairman [Samuel Ofosu Ampofo] inviting him or his representative to come and make a statement and be part of the programme [but] we didn’t get any response,” he stated.