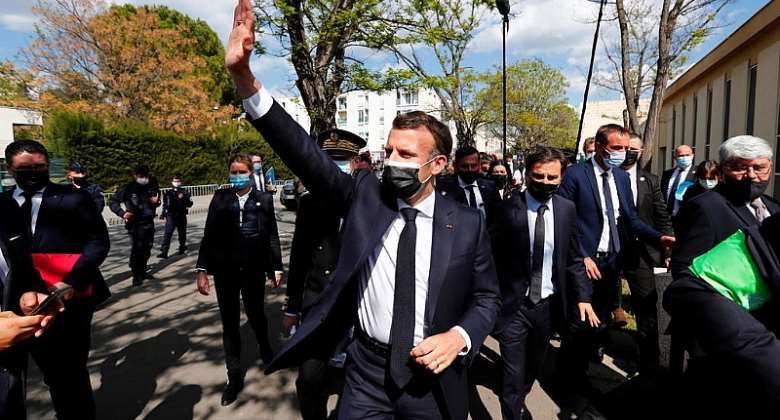 Police in the southern French city of Montpellier opened an attempted homicide investigation into a shooting on Monday that coincided with a visit of President Emmanuel Macron, on a push to defend his track record on security.

As the French president met representatives of the city's security forces in a police station, a man was taken to hospital with life-threatening injuries after being shot in a nearby neighbourhood of Montpellier.

Assistant prosecutor Jacques-Philippe Redon told AFP an investigation was opened for attempted murder after the man, a pedestrian, was hit in the chest with two bullets and another in the back.

Police said the assailant fled the scene, leaving behind the weapon used in the shooting.

The shooting happened as Macron and Interior Minister Gérald Darmanin listened to police officials explain challenges they faced on duty, from policing public demonstrations to fighting drug trafficking and gangs.

Macron announced 50 police reinforcements for the city and the creation of a training centre for police officers working in difficult conditions.

The visit came a day after Macron said he would honour his pledge to create 10,000 new positions in the police force by the end of his mandate next year.

“Every French person will see more blue on the ground in 2022 than in 2017,” Macron told newspaper Le Figaro  defending his performance with regards to law and order.

“If France, since 2017, has seen a decline of 18 to 25 percent in violent robberies, break-ins and vehicle theft, today we are witnessing a rise in violence against persons,” namely against security officials, the president said.

The interview marked the first time Macron spoke on security since the launch of a consultation in February on renewing public trust in police forces.

It also comes on the heels of parliament giving its last stamp of approval on new security legislation that has been contested by civil liberties groups, largely due to an article that would affect publication of images of police.

The interview and Macron's Montpellier visit were lambasted by right-wing critics who claimed that the president had not done enough.

“The president of chaos, of violence everywhere, all the time, of division, of social, fiscal and territorial injustice, is now selling us the peaceful life,” said Marine Le Pen, president of the far-right National Rally.

For other critics, Macron's interview and the criticisms it drew indicated that security was going to be high on the agenda for next year's presidential election campaign.

“Emmanuel Macron is doing what the right has always done when in difficulty,” said MP Aurélien Taché, who defected the president's Republic on the Move party last year.

“Turn to security, secularism and immigration, even if it means stigmatising a part of the French people. It's the start of a right-wing campaign.”