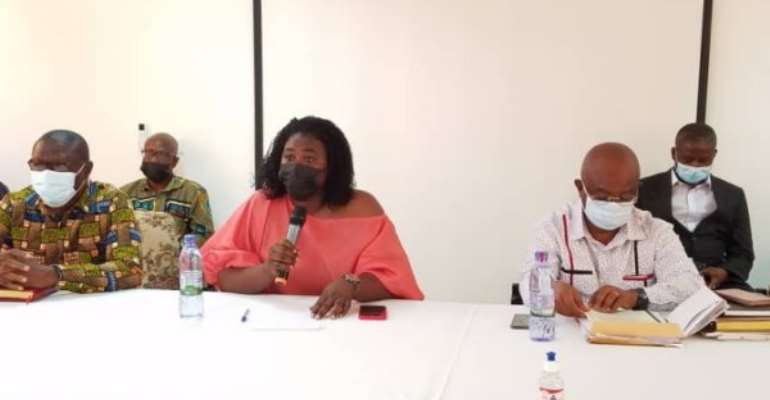 The Lands Commission in the Volta Region has refuted claims of selling parcels of state lands in Ho to individuals and politicians.

Mr Jonathan Kwabla, Regional Lands Officer, said an in-filling exercise was commenced in 2015 to address land wastage around residential bungalows with approval from the Ministry of Lands and Natural Resources, adding that the portions were leased and not sold.

He clarified at a stakeholder meeting on the issue on Friday that the lands were acquired by Government in 1921, and, therefore, the allodial interest of the land owners at the time was transferred to the State.

The Lands Officer noted that the in-filling exercise necessitated the formation of a Committee in 2017, after Dr Archibald Yao Letsa, Volta Regional Minister moved against allocations likely to compromise secured areas in the Municipality, which included the Residency.

He said all apportionments around the Residency were relocated to the Kabore area and although no new lands were out, entities that accepted the offer and advanced payments were being processed.

“The Lands Commission established by Law evoked its mandate to administer and manage state lands and other functions and in line with this in 2015, the Volta Region Lands Commission embarked on an infilling exercise (Efficient Land Use Policy) to meet the demand for plots of State land for residential and office developments in Ho.

“There is no sale of Government land and that can never be the case,” he said, adding that individuals could apply for a lease of lands, as the government's acquisition was not only for State use.

Mr Kwabla added that the Commission upheld its mandate to provide developmental space for the growth and expansion of the Region, and assured that provision was available for Agencies.

The Lands Commission in the Region had come under attack in recent weeks following concerns by some entities, including the Coalition of Volta Youth, Members of the Ho Municipal Assembly, and the Asogli State Council.

Mr Stanley Nelvis Glate, a member of the Coalition of Volta Youth, said leasing out the lands would affect the government's programmes and plans, and alleged that individuals were exploiting political power to acquire the land.

He further claimed that individuals were accessing the lands in a process “shrouded in secrecy”, and asked, “What are we leaving for the future?”

“There is no urgency for the land to be given out. Even if we don't use it today, the tree on that land will give us fresh air,” Mr Glate said.

He again alleged that some who had acquired the land were serving eviction notices to residents, while others who had been exposed, were reselling them.

Mr Emmanuel Adzome, Assembly Member for the Kabore Electoral Area appealed to the Regional Minister to ensure that the acquisition processes were revoked.

Dr. Prince Kludjeson, President of the Volta Development Forum (VDF), commended the youth and Members of the Assembly for securing State resources.

He noted, however, that State-acquired lands were not all reserved for government use and that entities such as the VDF would seek portions for its regional transformation agenda.

Dr Archibald Yao Letsa said no new application for the lands was received since 2016 and called for more “concrete” evidence to enable the Lands Commission to live up to the task.

He also commended the patriotic spirit of concerned parties and said the Regional Coordinating Council and the Lands Commission would partner with them to ensure what was right.