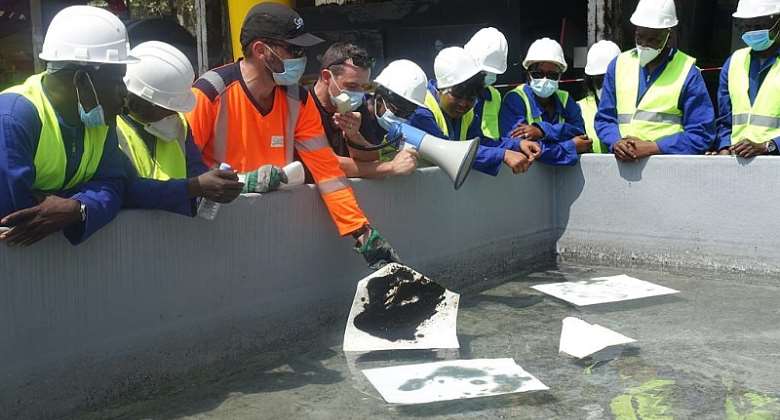 Since the installation of the first oil platforms in the 1960s, the Gulf of Guinea has become an important oil production area attracting foreign investment and accounting for 5% of world oil production.

In the midst of growing concern about the risks of marine pollution that can cause significant damage to the environment, wildlife, and coastal communities, ISMI has sought to serve its purpose by training key persons from Gulf of Guinea countries with financial support from the French cooperation.

In a welcome address, the Director of ISMI, CDT Abe Ake Lazare noted that although certain actions are being taken in countries in the Gulf, there is the need for more training for key personnel to acquire the needed skills to combat marine pollution.

He charges all participants to take full advantage of the training to build their capacity to perform efficiently.

“While significant efforts are being made at the national level to put in place emergency response plans, particularly within the framework of the Global Initiative for West, Central and Southern Africa (GI WACAF Project), there is still much to be done in terms of promoting efficient human resources, mastering the techniques of marine pollution control,” CDT Abe Ake Lazare noted in his speech.

In his concluding remarks, the Director of ISMI extended appreciation to France for the continuous support while making special mentions to the CEDRE experts, the Autonomous Port of Abidjan, and CNR International for their considerable efforts in the organization of the training.

Gracing the training with his expertise, Guillaume TURQUET de BEAUREGARD who is the Regional Coordinator for State Action at Sea in the Gulf of Guinea advised participants to take advantage of the practicals and participate in the modules taught for fruitful application when needed.

He concluded, “given the importance of the issues at stake, and the magnitude of the task ahead, there is no time to lose in embarking on our undertaking.”