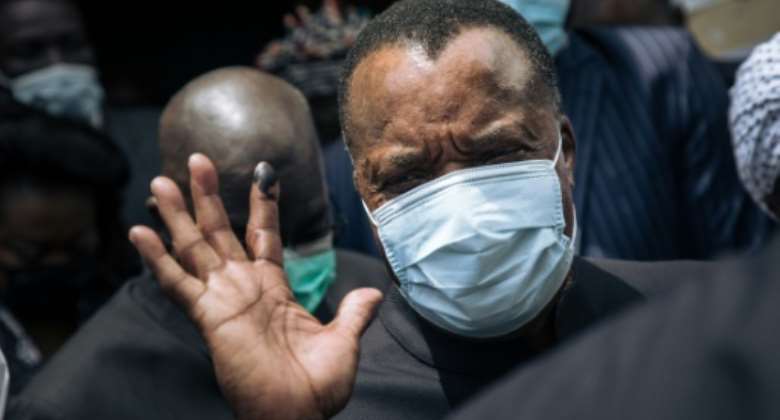 President Denis Sassou Nguesso, seen here after casting his vote last month, first came to power in 1979 -- he has notched up a total of 36 years in office. By ALEXIS HUGUET (AFP)

The Republic of Congo's veteran ruler, Denis Sassou Nguesso, was sworn in Friday for a new five-year term as president, vowing to protect the forests of the Congo Basin, a biodiversity jewel.

Sassou Nguesso, who has been in power for a total of 36 of his 77 years, took the oath of office before 18 other African heads of state, including from his giant neighbour, the Democratic Republic of Congo.

In an inaugural speech ahead of a UN climate summit this year, Sassou Nguesso described the Congo Basin as "Africa's lung, which enables the world to breathe".

He vowed to "give the Congo the world status it deserves in terms of protecting the environment and biodiversity".

The November 1-12 climate conference in Glasgow, Scotland, follows up on a landmark global pact in Paris in 2015 that committed countries to curbing climate-altering carbon emissions.

A key part of this is aid for protecting tropical forests, which are a carbon "sink" -- trees and vegetation suck carbon out of the air through photosynthesis and store it in trunks and branches.

Deforestation not only removes this buffer but also causes carbon dioxide (CO2), stored in the vegetation and the soil, to be released back to the air, adding to the greenhouse effect.

In 2017, a study in the British scientific journal Nature found that the forests in the basin of the Congo River hold 30 billion tonnes of carbon -- the equivalent to three years' worth of global CO2 emissions.

In other remarks, Sassou Nguesso pledged a "zero tolerance policy" with regard to corruption, declaring "I will be on my guard."

Graft is an entrenched problem in Congo, with suspected cases of embezzlement or laundering of assets abroad reaching the inner circle of power.

Transparency International classed Congo 165th out of 179 countries in its 2020 Corruption Perceptions Index.

One of the world's longest serving leaders, Sassou-Nguesso has been in power for an accumulated 36 years, first taking the helm in 1979.

Critics accuse the former paratrooper of iron-fisted rule and turning a blind eye to poverty and inequality despite Congo's oil wealth.

The ballot had been boycotted by the main opposition and overshadowed by the death from Covid of Sassou Nguesso's only major rival, Guy-Brice Parfait Kolelas, 61, who garnered 7.84 percent of the vote.