With giant swabs and grumpy camels, Kenya hunts for next deadly virus 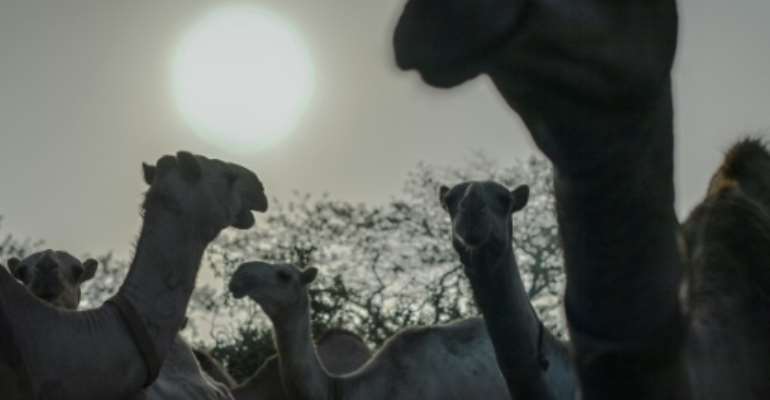 Camels stand in their pens as they wait to be released to pasture at the International Livestock Research Institute (ILRI) ranch. By TONY KARUMBA (AFP)

Kicking and grunting under the restraint of three men, the camel makes its displeasure known as Kenyan veterinarian Nelson Kipchirchir swirls a giant swab in the nostril of the grumpy dromedary.

It turns out camels don't much like being tested for coronavirus either.

But the research is critical to advance understanding of Middle East Respiratory Syndrome (MERS) -- a far deadlier cousin of Covid-19 that scientists fear could cause the next global pandemic.

The fear is this virus -- which has circulated among camels, and to a lesser extent, their owners in Kenya for some time -- could mutate, and a new strain could spread beyond herding communities into the general population.

So Kipchirchir has little choice but to risk the wrath of the cantankerous 300-kilogramme (660-pound), two-metre (6.5-foot) high camel to collect crucial nasal and blood samples.

On this foggy morning, one camel handler gets a violent kick from one of a dozen of the testy creatures who underwent the ordeal at the 13,000-acre Kapiti ranch.

Kapiti belongs to the International Livestock Research Institute (ILRI), headquartered in Nairobi, and its research station on the ranch where wildlife, cattle and sheep are studied by scientists.

ILRI began researching camels in Kenya in 2013, a year after the appearance in Saudi Arabia of MERS, a coronavirus which kills an estimated 35 percent of those it infects, with some 850 deaths recorded, according to the World Health Organization.

Pens used to hold camels on the crest of a hill at the International Livestock Research Institute (ILRI) ranch. By TONY KARUMBA (AFP)

MERS is a zoonotic virus, believed to have transmitted from bats to camels, which causes similar symptoms to Covid-19 in humans: fever, coughing and respiratory difficulties.

The emergence of Covid-19, which has killed almost three million people worldwide in 16 months, has sharpened focus on the next virus which could jump from animals to humans, or in the case of MERS, mutate to become even more transmissible.

WHO experts believe Covid-19 jumped from bats to humans via an intermediary animal which has not yet been identified.

According to WHO, some 60 percent of infectious diseases in humans have a zoonotic origin.

The UN's science advisory panel for biodiversity, called IPBES, warned in 2020 that pandemics will grow more frequent and deadly due to environmental destruction and climate change which are leading to increased contact between humans, livestock and wild animals.

Nelson Kipchirchir, at right, a research associate and resident vet, draws blood from an artery in the neck of a female camel as she is held down by livestock handlers. By TONY KARUMBA (AFP)

IPBES warned of up to 850,000 viruses which may be able to infect people, with five new diseases breaking out among humans every year -- any one of which has the potential to become a pandemic.

In Kenya, there are around three million camels, one of the biggest populations in the world, and their popularity is growing in arid areas as herders adapt to more frequent droughts, which wreak havoc on cattle and other livestock.

Meanwhile, demand is growing for camel milk and meat.

"A camel is very important," said Isaac Mohamed, one of the herders at Kapiti, who originates from Kenya's vast, arid north which borders Ethiopia and Somalia, both also home to massive camel populations.

Camels stand in their pens as they wait to be released to pasture at the International Livestock Research Institute (ILRI) ranch. By TONY KARUMBA (AFP)

"First, it cannot die if (there is) drought. Second, a camel can stay up to 30 days without water. Third, when shifting places, you can use the camel to transport your belongings."

At the ILRI laboratory in Nairobi, biologist Alice Kiyong'a gets a steady stream of samples taken from camels across Kenya, which she analyses for the presence of MERS.

A study that she led in 2014 showed MERS antibodies in 46 percent of the camels studied, and in five percent of camel handlers and abattoir workers who were tested.

"The MERS that we currently have in Kenya now is not easily transmittable to humans," compared to that in Saudi Arabia, she said.

But researchers are obsessed with the likelihood of a variant emerging that could make Kenyan MERS more contagious to mankind.

"It's exactly like with Covid... there are new variants that appeared... it is the same with MERS, the virus is changing all the time," said Fevre.

"I wish I had a crystal ball and I could tell you it might be that it never becomes hugely dangerous to humans," he added.

However, "it could be that with a few genetic mutations that it could become that way. So I think the important thing is to maintain an effort for doing surveillance... because then we will be ready when it happens."