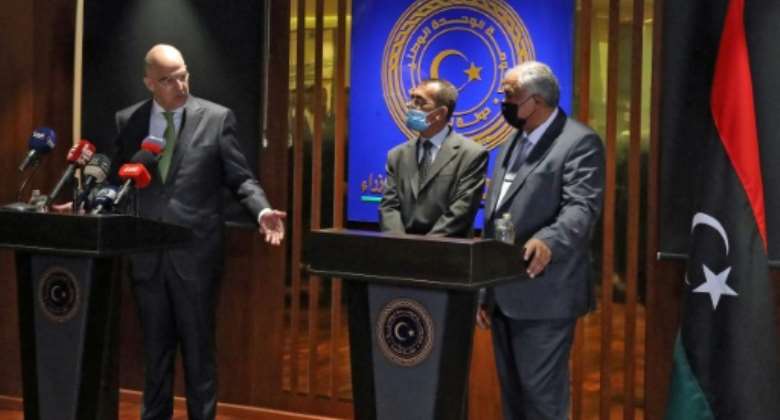 Greek Foreign Minister Nikos Dendias called Monday for the pullout of foreign forces from Libya, during a visit to the eastern city of Benghazi.

European Union members have been quick to boost ties with Libya since a new government took office last month seeking to end decades of chaos in the country.

Oil-rich Libya has been torn by conflict since the toppling of dictator Moamer Kadhafi in a 2011 NATO-backed revolt, with rival forces backed by foreign players vying for power.

Interim Prime Minister Abdul Hamid Dbeibah, tasked with steering Libya to elections in December, has demanded the departure of an estimated 20,000 mercenaries and foreign fighters from his country.

A January deadline for their withdrawal passed without any sign of them pulling out.

"Supporting Libyan sovereignty and the departure of all foreign forces from Libya as soon as possible" hold the key to resolving Libya's conflict, Dendias said in a joint statement with Libya's deputy premier, Hussein Attiya al-Gotrani.

"The Libyan people must be allowed to decide their destiny by themselves," Dendias added.

He said Greece would reopen its consulate Monday in Benghazi, Libya's second city and the cradle of the 2011 revolt.

France and Malta have also reopened their Tripoli embassies and a growing number of European officials have been visiting Libya.